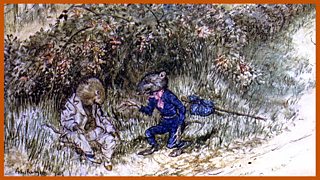 Ratty, Mole, Badger and Toad may be four-legged creatures at one with their natural surroundings (okay, maybe not Toad...) but they have remarkably human attributes. Ratty is whip-smart and methodical, Mole is loyal and sensitive, wise Badger takes nonsense from nobody, and Toad is a fun-loving, stubborn narcissist – though his heart is in the right place.

As part of its Spring is in the Air season, Radio 4 Extra is revisiting Alan Bennett’s adaptation of The Wind in the Willows by Kenneth Grahame. The story follows the animals’ shenanigans in the countryside, getting one another out of scrapes and learning a thing or two on the way. Over a century since the book was first published, there are still many important life lessons we can take from these four unlikely friends.

Images from BBC Teach: The Wind in the Willows

1. There is nothing half so much worth doing as messing about in boats

As the two row gently downstream, Ratty ponders to Mole that “there is nothing – absolutely nothing – half so much worth doing as simply messing about in boats … In or out of ‘em, it doesn’t matter. Nothing seems really to matter, that’s the charm of it … whether you arrive at your destination or whether you reach somewhere else, or whether you never get anywhere at all, you’re always busy and you never do anything in particular.”

Hope and help are never far away if you know what to look for, even in the darkest times.

Ratty probably isn’t aware of the concept of mindfulness, yet it’s clearly key to his happy existence. He enjoys living in the moment and watching the world go by from his boat, without a care for the past or a fear of the future. Whatever our hobby or passion, we could learn from Rat’s relaxed approach to life, simply enjoying an activity for enjoyment’s sake, rather than turning them into side hustles or tying them to goals, will bring far more gratification in the end.

"There seemed to be no end to this wood, and no beginning, and no difference in it, and, worse of all, no way out.”

Desperate to secure an introduction to the esteemed Mr Badger, Moly makes his way into the Wild Woods alone, against Ratty’s dire warnings. Night soon falls, and with it snow. Mole loses his bearings and finds himself surrounded by evil pointy faces, glinting eyes, and an unshakable sense of doom. Feeling utterly hopeless, Moly hides himself away in the hollow of a tree where he is discovered by Rat, just as the snow begins to fall. As they attempt to escape the woods, Mole trips on a doorstop, cutting his leg. Shrewd Ratty realises they have stumbled, quite literally, into Badger’s front door, and the kindly creature takes them in out of the cold and gives them a bed for the night. The moral of that story? Nil desperandum – do not despair! Hope and help are never far away if you know what to look for, even in the darkest times. Oh, and take a friend if you want to venture into the wilderness.

The reckless and feckless Toad has had countless fleeting pastimes over the years, from punting to caravanning. The most expensive (and dangerous) of these is his consuming obsession with motorcars. The first time Toad encounters a car is when he, his friends, and his trusty horse and cart are driven off the road and into a ditch by a speeding driver.

Toad is entranced by the speed and glamour; the ‘Poop Poop!’ of its horn. But his craze for the fast life sees him crash seven cars and hospitalise himself three times. Given that the speed limit at the time was 20mph, and the fastest cars of the day could reach speeds of around 70mph, you can only imagine the damage Toad would cause today.

His carelessness not only damaged himself and his belongings and ravaged his finances, it also drove his friends away from him. Toad’s obsession took over his life, and soon it mattered more to him than anything else, to the point that he was willing to commit a crime to get his car fix. Cue an intervention…

Spring is in the Air

A collection of programmes and features on Radio 4 Extra heralding the return of Spring.

4. Stay firm when staging an intervention

When Toad’s addiction to fast cars make him a danger to himself and others, Ratty, Mole and Badger step in. They cancel the delivery of his latest car, sit him down for a stern talking-to, and refuse to let him out of their sight until he had seen the error of his ways.

When staging an intervention, participants are advised to stand firm so as not to be swayed or manipulated by the participant. For trusting, kind-hearted Ratty, however, this proves difficult. Toad takes to his bed, declaring that the end is nigh. He decides that it’s too late for a doctor: Toad needs Ratty to call his lawyer. Convinced that his friend is on his last legs, he rushes to call the lawyer, leaving Toad unattended. Toad seizes the opportunity, climbs out the window, and scales his way down the side of the house to freedom. Ratty wonders how he could have been so naïve, a sentiment echoed by Badger and Mole.

5. Home is where the heart is

“It was good to think he had this to come back to; this place which was all his own, these things which were so glad to see him again and could always be counted upon for the same simple welcome.”

Excitement and exploration are all very well, but sometimes we need the simple things in life to keep us grounded.

Homes are just bricks and mortar (or intricate underground tunnels in this case), but that doesn’t stop us from being attached to them. After a prolonged stay with Ratty, Mole finds himself drawn to his old home by some kind of animal magnetism. On returning, he finds the place just as he left it so long before, when, tired of spring cleaning, he had downed his tools and embarked on an adventurous new life with Rat. Everything has its place, and he has ornaments, a skittle-alley, and even a water feature in his underground domain.

From the comfort of his own bed, Moly reflects that his new life above ground has broadened his horizons immeasurably. He is not ready to turn his back on his new friends and the possibility of new adventures. Yet his underground home will always be an anchor, and for that he is grateful. Excitement and exploration are all very well, but sometimes we need the simple things in life to keep us grounded.

“The animals were evidently puzzled and taken aback by this unexpected attitude of his; and Toad felt, as he moved from one guest to the other, making his modest responses, that he was an object of absorbing interest to every one.”

For all his good nature and humour, Toad is an outrageously boastful beast. He’ll tell anyone who’ll listen how magnificent his lofty residence, Toad Hall, is. He always needs the latest gadgets to show off and has no qualms about taking full credit for any good fortune that comes his way. He often figures as the main character in his tales of derring-do: escaping from prison, commandeering a train, smuggling himself onto a canal boat – even if, as is usually the case, someone else has done all the hard work for him.

But after Ratty, Badger and Mole help Toad forcefully liberate his home from the stoats and weasels that have moved into Toad Hall in his absence, Toad becomes an altogether more contrite character. His friends help him to see that his bragging and boasting have made him a laughing-stock in the area, and he realises he would be nothing without them. To his surprise, a large helping of humble pie helps him no end, and he’s pleased to note it doesn’t dent his popularity either. He is a changed toad. Well, almost.