The unicorn of the sea

Few animals inspire such fascination and intrigue as the Arctic-dwelling narwhal – discoveries of their long spiral tusk inspired legends about unicorns. But the true nature of the tusk is no less extraordinary, as Brett Westwood discovers in Radio 4’s Natural Histories. 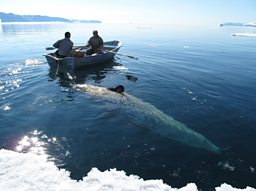 The term “narwhal” is Scandinavian and means “corpse whale”, which refers to the creature’s mottle grey-black skin colour – the colour of a corpse. In fact when they are born, the skin is pinkish – the mottling develops with age, becoming increasingly pale after four years. So the colouring can be used to give a rough estimate of how old a narwhal is.

Some narwhals live up to 100 years, but most live up to around 60 years.

The most extraordinary feature of the narwhal is the long, spiral tusk which always has a left- handed spiral. No one is sure why it twists this way. 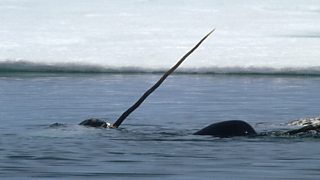 The tusk, which measures up to 3m in length, is actually a canine tooth which emerges from the left side of the upper jaw, through the lip.

Each male has a tusk, and occasionally two tusks, but fewer than 15% of females have one.

The narwhal tusk is a marvel of engineering. It is both very strong and very flexible – which is unusual – because if materials are very strong they are not usually flexible.

Unlike our own teeth, the narwhal tusk is soft on the outside and gradually gets hard and dense on the inside.

4. The narwhal and the unicorn

It’s thought that narwhals could be the origin of the unicorn myth. The great spiralling tusks of the narwhal, which were believed to be the horns of unicorns, were safeguarded in Churches from London to Kraków. The horns were treasured for their purifying and health-giving properties; cups made from the horns were claimed to be able to purify water and detect poisonous substances.

Artist's impression of a beached Narwhal, taken from "The Countries of the World" (1876)

5. To joust or not to joust

The function of the narwhal tusk is still a hotly-debated subject. Many researchers believe it is used for sexual seduction, much like antlers on a deer. Females will typically mate with the males with larger tusks.

Other theories suggest the tusk is a sensory organ able to detect changes in the environment; an aid to navigation in pack ice; a weapon for doing battle with other narwhals and predators, and for hunting prey.

Narwhals feed primarily on Arctic cod, squid and Greenland halibut. In 2017, drone footage suggested that they can use their tusk to hit and stun fish near the surface.

Narwhals using their tusks - footage from the WWF

Narwhals are revered and hunted by the Inuit people. The inner and outer blubber of the narwhal is called maqtaaq – it has a nutty flavour and is considered a delicacy. The skin is a rich source of vitamin C for the Inuit – vital when you live in the Arctic, with no access to fresh fruit.

Narwhal tusks have been used by the Inuit people as levers for lifting and moving sledges across the sea ice.

Narwhals use echolocation for foraging and navigation – this is the system used by bats on land. They produce pulses of sound and listen to the echoes to create an image of their surroundings.

Narwhals also produce pulses, calls and whistles which are thought to be used for communication. It’s thought narwhals produce unique group or individual calls – rather like dolphins.

Narwhals are very well adapted to living in regions with ice cover. For example, they lack a dorsal fin which allows them to travel more easily in ice.

Narwhals are good at navigating in pack ice but they are not strong enough to break through ice, and therefore depend on fractures and cracks in the ice. When breaks in the ice are not available, they can become entrapped, which can be fatal. 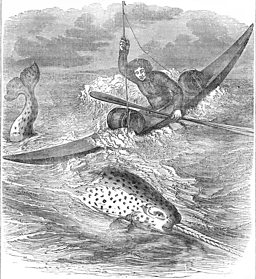 1868 engraving of a Greenland Inuit hunter spearing a narwhal