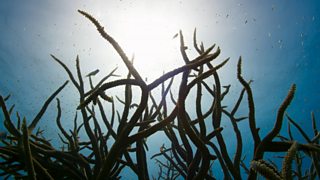 My love for the ocean and the amazing creatures that live in it started early, sailing around the world on my parent’s boat as a young child. When they eventually settled back on dry land in Port Douglas, Australia, I would spend my weekends exploring underwater on the Great Barrier Reef. When the time came to go to university, marine biology was the obvious choice. After graduating, I spent over a year researching on Lizard Island, an incredible remote research station in the northern stretch of the reef.

This was all perfect preparation for the last four years, during which time I have been the series researcher for Blue Planet II, a role that has taken me out into the field many times to capture spectacular underwater behaviour across the world’s oceans. The most rewarding shoots have been for the coral reef episode, which brought me back to my roots at Lizard Island, to work with my old friend Alexander Vail. Together we discovered some incredible stories happening on the reef there – a tuskfish (that we nick-named Percy) that uses an anvil to crack open his clams and groupers and octopuses that cooperatively hunt together. We spent a month with director, Rachel Butler and cameraman, Roger Munns filming these extraordinary behaviours which reveal just how intelligent fish can be.

The days were long – we would spend up to four hours at a time diving the reef to get the perfect shots. After a month, we had what we needed to tell these amazing stories. But what we did not know was that the reef we had dived every day was about to be completely transformed. 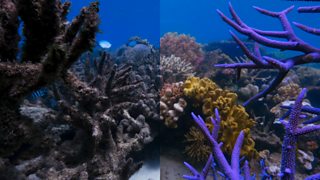 Only a couple of months after we finished filming, I was back at my desk in Bristol when my Mum sent me some photos of the Great Barrier Reef. It was clear that there was something terribly wrong. The corals where turning white. When sea temperatures are raised above a critical threshold, some reef-building corals eject the plant-like cells that live inside their tissue, providing them with up to 90% of their energy. This process is known as coral bleaching.

With a heavy heart, I got in touch with Alex to see if he could document the change happening on the reef using time-lapse imagery. He set up underwater cameras on the reef in fixed positions, which then went on to film the tragic transformation for the next four weeks. During this time, the temperatures remained high. Alex told me that around 90% of the branching corals at Lizard Island died. Even Percy’s “kitchen” – a boulder coral where the ingenious tuskfish cracks open his clams - was turning white.

The news that once thriving, bustling underwater cities that I knew so well were dying was truly heart-breaking. In some parts of the Great Barrier Reef, as many as half the corals died and it only got worse. There was a second bleaching event in 2017. The Great Barrier Reef has bleached before, but never to this extent and never, since records began, back-to-back giving the reefs no time to recover. Scientists now estimate that approximately two thirds of its shallow water corals bleached in 2016 / 2017. 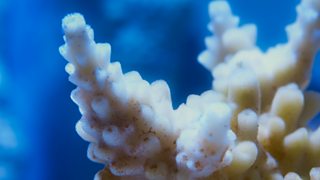 Despite these devastating events on the reefs I have known since I was tiny, there is hope. Many hard corals on the Great Barrier Reef join a spectacular mass spawning event, in which their larvae are dispersed and carried by currents, perhaps to settle on a patch of reef that has been so badly affected and thereby start to repair the damage. We are already seeing early signs of recovery. But whether they have a long term future will depend ultimately on how fast the oceans heat up and how warm the seas become. I, for one, remain optimistic that corals will survive into the future.