Close menu
We Can Change The World
Main content

If you’ve ever thought that doing a small thing can’t make a difference – you’re wrong, it totally can – and the We Can Change The World podcast proves just that.

The new series is presented by Isy Suttie – comedienne, actress, writer and winner of the 2013 gold Sony Radio Academy Award (Pearl And Dave radio show) – who interviews ordinary young people who are achieving exceptional things in their community – and even worldwide. 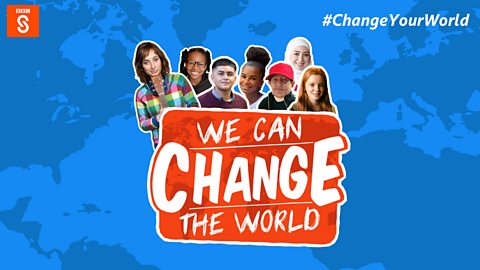 We Can Change The World

Hear what young people are doing to make a change.

In a world which seems full of negative news stories, We Can Change The World spreads the voices of hope from the smallest of beginnings. The BBC Sounds series showcases how age doesn’t come into question when you’re passionate about changing something for the better.

12 episodes are available now – each focussing on one issue – talking us through the highs and lows of seeing something you don’t like in the world and making the first steps to change it.

How would you change the world?

Isy talks to determined young voices about their journeys; from feeling mad and moved by something to tackling the issue head on – using their passion to empower others and help make the world around them a better place.

In the latest episodes you can hear from:

The series isn’t a complete departure from Isy’s roots, as it includes a witty theme song composed by the artist, with each podcast ending with a personalised rendition of the song where the lyrics reflect the achievements of her young guests – giving the series an approachability and lightness of touch whilst offering compelling, powerful and often moving stories that are inspiring.

Isy says: "I've talked to a range of young people about how they've gone about making a change to something they feel isn't right – from the very first step they took to make a difference, often in their bedrooms, to what they've gone on to achieve.”

“It's staggering what commitment, passion and true grit can bring about, and the overriding thing I've learnt, and I hope you will too, is that anyone can change the world around them - you've just got to take that first step. It's been really fun and also enlightening and moving to make the podcasts."

We Can Change The World is available now on BBC Sounds, where Isy interviews twelve unstoppable young minds.