Particulate Matter in the air (or PM) can be very bad for our health. Staying away from traffic as much as possible is one way to keep our exposure levels down, but what about in our actual houses? More often than not, houses are on roads – and roads carry traffic. So is there a way that we can help reduce the concentration of PM that creeps into our houses? 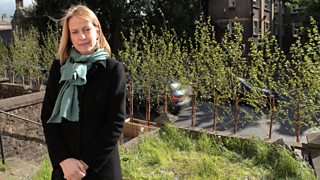 We set up a row of 24 young silver birch trees in tubs along the pavement of the busy A9 in Lancaster. Behind the trees were 4 terraced houses, and next to those, 4 identical terraced houses that didn’t have birch trees between them and the traffic on the road.

At the beginning of the fortnight experimental period, Barbara and Gabriel cleaned the TV screens and computer monitors inside each of the 8 houses. These were then left on standby for the next 2 weeks, and acted as very good dust-traps for the PM pollution.

Two weeks later, Gabriel and Barbara came to wipe down an identically sized area of the screens in the front room of each of the houses. Back in the lab, the magnetic properties of each of these wet-wipes was then measured in order to assess the quantity of (iron-bearing) particulate traffic pollution on each one, giving us a measure of the level of pollution in each of the 8 houses (4 protected by trees and 4 not protected by trees).

The results were astounding: the fortnight’s pollution in the 4 houses with trees was 50-60% lower than in those without.

So how were the trees giving so much protection?

Electron microscope images of the leaves of silver birch trees show why they are so good – they are covered in tiny hairs and ridges which help trap the pollution particles. Their sparse structure also helps keep the air circulating and flowing past the leaves to filter it effectively (rather than trapping pollution near the ground as bigger and denser trees do). Each time it rains, the PM pollution is washed off the leaves, allowing them to start trapping more.

So whilst the birch trees are in leaf, at least, they are providing an excellent pollution filter. And given that heart disease (which is seriously affected by particulate air pollution) is Britain’s biggest killer, a couple of small silver birch trees in your front garden – or planted along the pavement by the local council – could be a huge boost to your health.