Due to the ongoing restrictions around COVID-19, the following further changes have been made to the BBC SSO’s schedule in February. 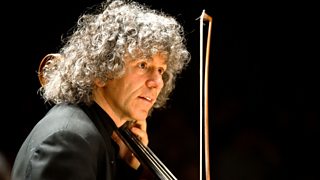 The broadcasts on Saturday 13th and Thursday 18th February will no longer go ahead, with the orchestra’s recording of Stravinsky’s The Soldier’s Tale postponed to a future date, and Pulcinella under Associate Conductor Alpesh Chauhan scheduled to be broadcast later in the year.

There will now be two live broadcasts on BBC Radio 3. On Thursday 4 February, the concert directed by the orchestra's leader, Laura Samuel, will feature Dvořák’s Serenade for Strings and Suk’s Meditation on an old Czech hymn 'St Wenceslas'; while Steven Isserlis replaces the previous advertised Pablo Férrandez on 25 February for Shostakovich’s First Cello Concerto, now conducted by Mark Wigglesworth. The full repertoire for each concert can be viewed here.

The orchestra continues to work under very strict adherence to social distancing and government guidelines. The situation is being continuously reviewed and as such these broadcasts are subject to further alteration or cancellation.