Summary: You could schedule this assembly close to Holocaust Memorial Day (27th January), the anniversary of the liberation of Auschwitz-Birkenau concentration camp. On this day, we remember the millions of people murdered by the Nazis and those who died in later genocides in Cambodia, Rwanda, Bosnia and Dafur. It is a time to consider how we challenge discrimination, racism and hatred, which left unchecked lead to such crimes against humanity. 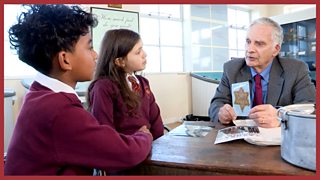 NB - Ensure you watch the video in advance to assess its suitability for your group. In it pupils Beatrice and Lamek meet Steven Frank at Croydon Airport Museum. Steven tells them how in WW2 Nazi Germany tried to take over Europe and destroy the Jewish people. Back then, Steven was five. The Nazis forced Jewish families like his to wear yellow star badges. They were banned from many places and forced to live separate lives.

Later, most of Steven's family were sent to Theresienstadt, a prison camp. Many Jewish people died there from disease and harsh treatment. Steven's mother kept the family alive with bread-and-water stew. At the end of the war Steven came to the UK, landing at the very place they are meeting now: Croydon Airport.

End of speech: 'We are all different, but we should be respectful of one another.'