Germany is a nation of startling diversity and its regional specialities represent centuries of history. Germany's many varieties of beer and sausage are still evolving and emerging. Listen: One People, Many Sausages

1. Riots broke out over the price of beer in Bavaria

In 1844, King Ludwig I of Bavaria's attempt to impose a beer tax provoked a serious outbreak of 'beer riots'.

They were only diffused when the King ordered a 10% reduction in the price of beer.

2. There is a museum in Berlin dedicated to Currywurst

Currywurst was created in the late 1940s in Berlin. 'They had only very cheap sausages then, so they decided to camouflage them by sprinkling curry powder on them,' says Harald Scholl of the Munich Slow Food Convivium.

The Currywurst has become an essential Berlin experience, served sliced with ketchup. Its history is celebrated at the Deutsches Currywurst Museum, not far from Checkpoint Charlie.

The Beer Purity Law ruled that only barley, hops and water could be used to make beer and nothing else.

Food historian Peter Peter argues that the law 'was simply to prevent people brewing with wheat or rye, because wheat and rye would be better used for bread.'

The law survived until the 1990s, but many German brewers still adhere to it voluntarily.

4. The Frankfurter was originally a luxury item

Frankfurters were served in honour of the coronations of the Holy Roman Emperors in Frankfurt, from the 16th Century onwards.

An ox, stuffed with local pork sausages, was roasted in the main square to celebrate. The sausages were a great luxury because they were made of the finest mincemeat.

5. Germany has a 2000 year recorded history of heavy drinking

Writing in the 1st Century AD, the Roman historian Tacitus noted the German thirst. 'To keep drinking night and day without a break disgraces no man,' he wrote.

'Their quarrels are frequent, as usual amongst men who are drunk, and these quarrels rarely end in angry words, but mostly in wounds and bloodshed.' 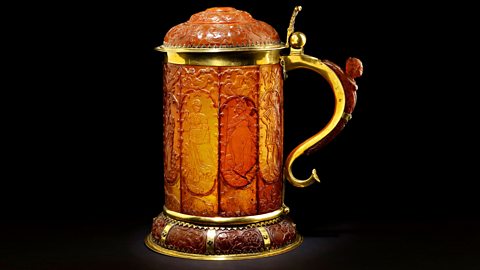 Neil MacGregor says Germans have long enjoyed beer and celebrated it in style.

6. Germany has around 1,200 different types of sausage

Current estimates suggest that France can now offer around 400 cheeses. This is still outnumbered three to one by German sausages.

Listen: One People, Many Sausages

7. The Weihenstephan Brewery claims to be the world’s oldest

Weihenstephan Monastery Brewery outside Munich was established in 1040. Its close neighbour is the Technical University of Munich, which has a renowned Department of Brewing and Beverage Technology.

In the late 1970s, the German Democratic Republic developed the Ketwurst, a hot dog sausage dipped in ketchup and served in a roll with a specially-shaped tubular hole.

The name combines 'ket' from ketchup with the German word for sausage.

Katharina von Bora, who married Martin Luther in 1525, was a trained brewer from her days as a nun and held a brewing licence.

When Luther was apart from her, he wrote to tell her how he longed for her home-brewed beer, rather than the local offering.

Listen: Luther and a Language for All Germans

10. The Bavarian Weisswurst is only eaten in the morning

The Bavarian white sausage is traditionally made freshly each morning, using minced veal and bacon but no preservatives.

So in the days before effective refrigeration, it had to be eaten straight away. Even today, no true Bavarian would dream of eating Weisswurst after midday.

Features about Germany and the objects in this series