The MTV Video Music Awards were held at the end of August 2019.

Taylor Swift, Billie Eilish and Ariana Grande were among the winners, but the wins weren’t so great when it came to the younger TV audience. According to the Hollywood Reporter, viewing figures hit an all-time low of 1.93 million among 18-49 year olds, down from 2.25 million in 2018.

This prompted the question on Nihal Arthanayake’s monthly music review on BBC Radio 5 Live: What are these award shows even for? Are they actually more about social media videos that go viral?

This year, the moment when Missy Elliot brought on Alyson Stoner, who first danced with her in her 'Work It' video 17 years ago, was huge.

A clip of that moment had more than 12 million views on Twitter.

Nihal: There were some brilliant moments at the VMAs, one of which went viral. Did either of you sit down and watch the VMAs?

I think this is why the viewing figures are starting to go down, because people are still engaging, they’re just doing it in different ways, on different screens. They’re getting involved with the banter on Twitter.

I do the early Breakfast show on Radio 1, I’m up at around at 04:00 in the morning, and this is when a lot of huge American TV shows are actually live, so I get to see everybody talking about it, and having bants. And it’s a beautiful way to watch something, because people will clip it off for you - you get to see the highlights.

Nihal: I hear every year that the VMAs viewing figures have gone down, but nobody ever tells me what their social media has done. Unless you’re having both of those conversations, you’re slightly sounding a bit old and irrelevant.

That clip of Alyson Stoner I saw everywhere, which tells me that before you may have watched the VMAs - and people may have talked about it a bit afterwards - but it was gone. Now, it goes global instantly with a 30-second clip.

[According to Conviva Social Insights, social and online video views for the VMAs were up 85% year on year.]

Adele and Gabriel in the studio

So, if I know Kendrick Lamar is going to perform at the Grammys, I’m going to watch it, because I know he’s going to do something amazing. And I’ll probably see it on Twitter. I wouldn’t sit down and watch it live. 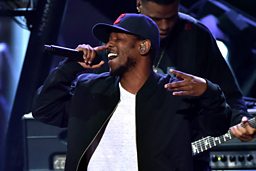 Adele: And as a woman as well, it’s really important for me to see Missy Elliott, to see her be celebrated, to see the other girls that she has opened doors for.

It was a beautiful moment to see Lizzo living her best life, being incredible at the Grammys, and Queen Latifa stood up in the crowd applauding her. "

That’s why I think these award shows are still so important. 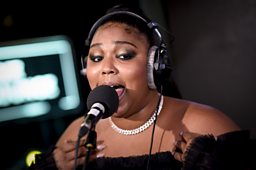 Nihal: But what do you think their relevance still is? A lot of people argue charts aren’t relevant any more?

Adele: I think it’s just the measuring system. I don’t know how they measure TV viewing figures, but I know I have never been asked – and I think that is the problem.

If you look at the engagement - across platforms - that would probably give us a better idea. I think at the moment awards ceremonies still have their place, because they are supposed to be about the artists and the fandoms of the artists, and I think the artists still care.

Gabriel: I think what’s interesting now, because of the internet, the awards themselves mean less, but the performances and being there means more.

Because of the internet, the awards themselves mean less, but the performances and being there means more."

So, if you look at someone like Lizzo this year - her various performances at the BET awards, the VMAs, she’s got so many more fans because of these clips that have gone viral.

So I think for the artists it’s more about getting that look than getting the awards.

The Monthly Music Review is at 15:00 on the last Thursday of the month.