The Top Gear test track, built on the main runway and taxiways of Dunsfold Aerodrome in south-east England, is designed to test cars to their very limits. It includes a range of corners, from the slow technically challenging Hammerhead to the fast and terrifying Follow-Through, to expose any weakness in a car's chassis. It's also a mechanically punishing track and many a big-name supercar has been carted away from it with tyres, clutch and brakes in a state of meltdown. A car has to be fit as well as fast if it wants to go above Hammond's reach on the Top Gear power lap board. 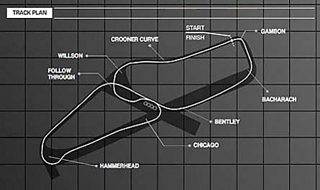 The track is also home to Top Gear's tame racing driver, the Stig. Some say he's morbidly afraid of cats and can actually smell corners. All we know is he's faster around the test track than any other driver alive. We've even bussed in a gaggle of Formula 1 legends, including Lewis Hamilton, Jenson Button and ex-world champions Nigel Mansell and Damon Hill, to try and beat his time. So far, all have failed.

Some corners, Like Wilson and Gambon, are naturally dictated by the shape of the airfield, although they're pretty demanding all the same. Others, like Chicago and Hammerhead, were created from scratch on the blank canvas of Dunsfold's tarmac. Chicago is particularly interesting because we asked the brainiacs from Lotus to design us the kind of corner that would test handling. The eggheads did us proud. It might not look tricky, but just watch how less competent cars slither into understeer or twitch into oversteer as they power through. That's even with the superhuman driving skills of the Stig.

The genuinely scary Bentley Bend is probably the test track's signature turn. Most cars come through here flat out, grazing the tyre wall and shaking the remote camera with a wall of displaced air. The shot we get by plonking a little camera on top of the tyres never fails to get a gasp from the audience when we show the lap in the studio.

People often ask why we don't run races or have track days. The simple answer is we can't because a figure of eight and sooner or later the whole thing would turn into a massive pile-up. However, occasionally we film more than one car running around the lesser known 'short circuit', which takes in the top half of the eight and still manages to include the challenges to Chicago and Hammerhead.

Over the years, the track has become more dog-eared and weathered, like a pair of old shoes. Some of the marker boards bear the scars of over exuberant celebrities smacking into them with our Liana and Lacetti, the apexes of Bentley and Bacharach are worn back where the Stig has battered them with his perfect racing lines and the start/finish line is getting a bit faded. But we rather like it like that.

Away from the line, the first turn you come to is a little kink called Crooner Curve, named in honour of the original Stig's fondness for easy listening music. We had to dig pretty deep in the Top Gear archives to discover the name for particular point on the track - being such a minor change in direction, it rarely warrants a mention. Let's face it, if a car has trouble getting round this bend it's going to end up buried in a tyre wall - also known as "doing a Koenigsegg".

After the amuse-bouche that is Crooner Curve, it's time to tackle the first corner proper - Willson Bend, named after former Top Gear presenter Quentin Willson. There's a little bump on the way in that unsettles a bad chassis, as the track starts to sort out the cars that handle from those that flounder.

Down to second gear, around the tyres and through Chicago - as in the band Chicago, another old Stig favourite. This bit of the track was designed by Lotus and is what its boffins call a 'steady state' corner - it loads up the outside tyres and exposes a front heavy chassis that understeers or a rear-biased one that oversteers. That's why you often see powerful rear-wheel drive cars kicking their tails out on the exit.

This is a tricky and testing corner, named because, erm, it's sort of hammerhead-shaped. Even a slow car can be nudging 90mph by the time it arrives here, so it's hard on the brakes, down to second gear, chuck it left and then flick it right. In the wrong car, this can prompt horrible understeer and a scary moment for the camera crew stationed on the outside of the bend. Overkeen drivers will get back on the throttle too early on the way out, whereas the Stig - being a supremely skilled - knows you have to feed in the power gently to make a neat getaway and then really hammer it as the exit opens up.

The fastest and scariest corner on the track, Follow-Through is so called because it's meant to be flat out and also because of the effect it can have on your undercrackers. Even the Stig, a man who knows no fear, will momentarily lift off through here in a powerful car. This is where he lost it in the Koenigsegg somewhere north of 120mph. Shortly afterwards, we suggested the car was fitted with a rear spoiler. Sensibly, Koenigsegg agreed.

The jink left at the end of Follow-Through, Bentley Bend is named not after the British luxury car maker but as a tribute to former Top Gear producer Jon Bentley, who now makes a living popping up on Channel Five and explaining things. Keep the throttle buried here, blast through the tyre wall - if you're really fast, you'll make the remote camera on the tyres wobble - and clip the kerb on the way through.

Now more commonly known as 'the second-to-last corner', this was originally named as a tribute to another one-time Stig favourite, Burt Bacharach. It's a tricky one because you come blasting down the main runway and have to lean hard on the brakes and make the turn in a move Clarkson describes as "like threading a needle". Little wonder this is the most common place for the stars in our reasonably priced cars to lose it, usually because they turn in too fast and the car spins out on the grass. Then on the next lap they get scared and attempt it at 5mph, ruining their time. Dah! The Stig on the other hand, nails it to perfection and clips the grass at the apex to boot.

This corner was originally called Carpenters - yes, another reference to old Stig's musical preferences - but when legendary actor all-round splendid chap Sir Michael Gambon almost flipped our old Liana here, it was the least we could do to rename it in his honour.