Middle-earth in colour: How Tolkien drew his fantasy universe

The author of the most influential fantasy novels ever written, The Hobbit and The Lord of the Rings, also created stunning illustrations of his Middle-earth universe. Curator CATHERINE McILWAINE explains the story behind the Bodleian Library's new JRR Tolkien exhibition.

Colour illustrations for the first edition of The Hobbit: Bilbo comes to the Huts of the Raft-elves (left) was Tolkien’s favourite watercolour and he was disappointed to find that it had been omitted from the first American edition / Conversation with Smaug: Bilbo Baggins, rendered invisible by a magic ring, converses with the fire-breathing dragon © The Tolkien Estate Limited 1937

JRR Tolkien (1892-1973) is most widely known today as the author of the best-selling fantasy work The Lord of the Rings. But Tolkien, who taught at the University of Oxford for most of his life, was also a talented artist, designer and calligrapher, as well as a renowned scholar of Old and Middle English.

Tolkien's invented languages led to the creation of legends, people and places, and ultimately to an entire world filled with thousands of years of history, studded with tales of love, loss, treachery and heroism.

He combined all his talents to create the imaginary world of Middle-earth, devising languages and alphabets, constructing maps, painting landscapes and drawing designs for artefacts and heraldic devices. He laboured on this creative endeavour throughout his life, snatching time from his busy schedule as a Professor of Anglo-Saxon and as a father of four children, to create a fantasy world unsurpassed in its richness and attention to detail.

Tolkien’s first love was languages and as a professional philologist, he became adept at creating his own. His invented languages led to the creation of legends, people and places, and ultimately to an entire world filled with thousands of years of history, studded with tales of love, loss, treachery and heroism. He began to create his mythology while a student at Exeter College Oxford, or possibly even earlier when he was still at school, and continued until his death in 1973.

One of the earliest written texts relating to his ‘legendarium’ is a poem, The Shores of Faery, which is accompanied by a watercolour illustration. 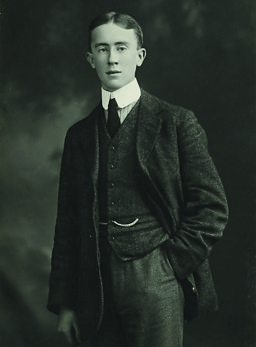 An early version of Gandalf? Eeriness, from The Book of Ishness, 1915 / The Shores of Faery: a depiction of the white citadel of Kôr, the city of the Elves in Valinor, 1915; one of the earliest known items relating to The Silmarillion © The Tolkien Trust 1995

It was only when his children’s story, The Hobbit, was published in 1937 that Tolkien's artistic talents were brought to a wider audience for the first time.

They were created in 1915 during his final year as an undergraduate at Oxford, and depict the city of the Elves in Valinor, the land of the Gods which lies to the west of Middle-earth. They were part of a much wider mythology which occupied him his entire life. This work, known as The Silmarillion, was left unpublished on his death and the manuscript material has been gradually edited and published by his son Christopher Tolkien in the forty-five years since his father’s death.

Tolkien’s talents as an artist led him to paint and draw scenes from his stories. These works of art were created purely for pleasure during the Oxford vacations when he was freed from the pressures of lecturing and examining, and he seems to have had no thought of publication. It was only when his children’s story, The Hobbit, was published in 1937 that his artistic talents were brought to a wider audience for the first time.

Tolkien's notes can be seen around his design for the dust jacket of The Hobbit. There is also a publisher's note, "Ignore red", to reduce printing costs. © The Tolkien Estate Limited 1937

Having discovered his considerable artistic ability, the publisher asked him to design the dust jacket and Tolkien created a striking wraparound design in green and blue, bordered by ‘magical’ runes.

The story began as a tale told to his children in the evenings and found its way to the publishing firm of George Allen & Unwin by chance.

It was accepted for publication and was thought to require only one or two maps by way of illustration. However when Tolkien sent in a number of black and white illustrations drawn in black ink depicting scenes from the book, the publisher was charmed by them and ten of these illustrations were reproduced in the published work.

Having discovered his considerable artistic ability, the publisher asked him to design the dust jacket and Tolkien created a striking wraparound design in green and blue, bordered by ‘magical’ runes.

The publisher was delighted and declared, "Nobody but the creator of The Hobbit could have produced something so suitable." More was to come. When the American publisher, Houghton Mifflin Co., suggested that American children would need colour illustrations, Tolkien took up the challenge and produced five beautiful watercolours which were reproduced in both the American and English editions.

Elvish fire writing © The Tolkien Trust 2015 / Colour illustration from The Hobbit of Rivendell, an Elvish realm which also features in The Lord of the Rings and The Silmarillion © The Tolkien Estate Limited 1937

For The Lord of the Rings, Tolkien drew maps and landscapes, designs and artefacts, to aid his visualization of Middle-earth.

The success of The Hobbit led to demands for a sequel, and Tolkien responded by writing The Lord of the Rings. It took him twelve years to complete alongside his full-time academic duties, and during this time he drew maps and landscapes, designs and artefacts, to aid his visualization of Middle-earth.

His delicate drawings of Lothlórien and Barad-dûr, executed in coloured pencil, were part of the creative process, and were not intended for publication.

By the time the book was finished however, it had outgrown its original purpose as a sequel to The Hobbit and had become a long fantasy novel for adults. It was over 1000 pages long and the question of including illustrations was not seriously considered.

Tolkien did not show the publisher any of his drawings but he did lobby for the inclusion of designs such as the Doors of Durin and pages from the Book of Mazarbul, both of which incorporated his Elvish script and languages.

The publisher was daunted by the size of the work and the cost of production, and was also uncertain about its marketability. They cut the ‘facsimile’ pages from the Book of Mazarbul, which Tolkien had created using his knowledge of medieval manuscripts, but accepted his offer to design the dust jackets.

The book was eventually published in three volumes in 1954-55. Expecting to lose money, George Allen & Unwin offered Tolkien a half share in the profits once production expenses had been paid off. It seemed that neither the publisher nor the author – who was nearing retirement after thirty-five years in academia - expected the work to become a best-seller.

The Lord of the Rings sold steadily at first, then gradually became a publishing phenomenon. The rest is history. It has been translated into over fifty languages, from Albanian to Yiddish, and was voted book of the century in 1997 - a result repeated by a poll for the BBC’s Big Read in 2003 where it took the top spot as the nation’s favourite book.

Tolkien’s reputation as the pre-eminent fantasy author of modern times is assured, and his work is as popular today as it was when it was first published over sixty years ago. It is the unique combination of his many talents – as a philologist who invented languages, as a scholar of Old and Middle English, as a talented artist and designer, and a consummate story-teller – together with his extraordinary imagination and attention to detail that produced the remarkable ‘legendarium’ of Middle-earth, and has drawn legions of readers into the believable reality of his imagined world.

Catherine McIlwaine is Tolkien Archivist at the Bodleian Libraries and curator of the exhibition Tolkien: Maker of Middle-earth, which runs 1 June - 28 October 2018. 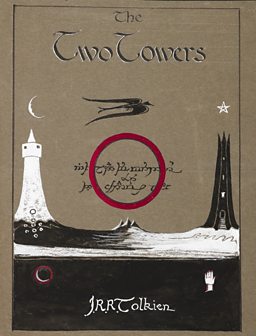 The Two Towers dust jacket; the second part of Tolkien's The Lord of the Rings trilogy © The Tolkien Estate Limited 1937 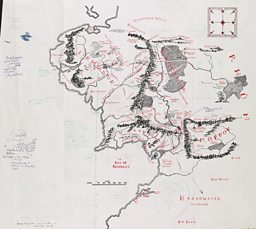 Tolkien's annotated map of Middle-earth | full-size in new browser window
A map of Middle-earth was included in the first two volumes of The Lord of the Rings; an essential guide for readers. This 1969 version bears Tolkien's annotations, revealing extraordinary conceptual details of his imaginary world. © Williams College Oxford Programme & The Tolkien Estate Ltd, 2018 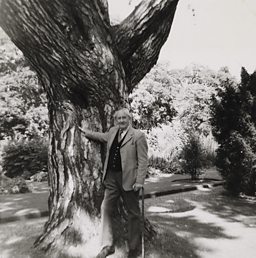 The last photograph taken of Tolkien, on 9 August 1973 (he died less than a month later). He is standing in the Botanic Garden, Oxford, next to his favourite tree, the Pinus Nigra © The Tolkien Trust 1977