Over recent years there have been contradictory headlines in the media about the supposed hygiene aspects of beards. Some have claimed that they are thronging with bacteria, including those from human faeces. Infectious disease specialist Dr Chris van Tulleken decided to get to the bottom of the matter by doing his own, proper, sampling. 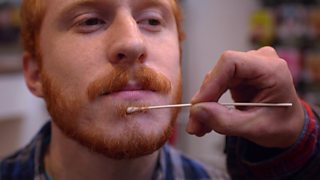 Chris swabbed the beards of men on the street in London, and delivered the agar plates to Dr Adam Roberts of UCL, who cultured them and then identified the species. He found over 100 different bacteria from 20 different beards – plus a couple of moulds. However, when he identified the bacteria, they were all commonly found on skin (mostly Staphylococcus species). There was one (Barnesiella) which can be found in the small intestine – but that doesn’t necessarily mean that it came from faeces.

So, it appears that beards are not likely to be unhygienic – they are not harbouring particularly nasty bacteria.

However, Adam also tested the bacteria for their antibiotic properties – how well they killed other bacteria. In an environment like a beard, where there are lots of bacteria competing for resources, some have evolved to produce toxins to kill others – and these toxins are what we use as antibiotics drugs.

Adam found one species of bacterium in a beard swab that created a ‘ring of death’ around it – killing other bacteria. He will investigate this further, as new antibiotics are vital in medicine.