How 3D printing could revolutionise surgery 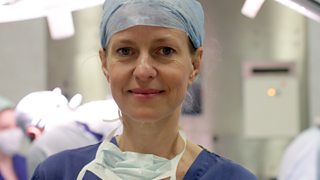 Several years ago Edward Evans fell seriously ill when an infection began eating away at his sternum – the bone at the centre of the ribcage that protects the vital organs in the chest. Medication failed to eradicate the problem, so Edward had to undergo surgery to have the infected sternum and parts of his adjacent ribs removed.

At the time, it was impossible for the surgeons to do anything more than cover the resulting defect with Edward’s own muscle, because putting any foreign object into his chest when infection was rampant would almost certainly have resulted in that foreign material also becoming infected.

Edward recovered well from this surgery, but the absence of a solid sternum meant that his heart and lungs were extremely vulnerable, and his quality of life was limited. So doctors at Heartlands Hospital in Birmingham arranged for Edward to undergo another operation to have a new sternum implanted.

Normally in situations like this the implant would be made from a hand moulded cement block wedged in a synthetic mesh. This is a tried and tested method, but surgeons have always been searching for a better, more modern alternative.

In Edward’s case thoracic surgeon Mr Ehab Bishay was able to offer such an alternative – a bespoke sternum made from titanium and 3D printed on the other side of the world. 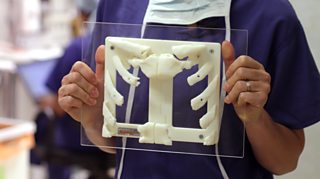 Titanium is a strong, lightweight, biologically compatible metal that becomes integrated, not rejected in human bodies. And this, coupled with advances in 3D printing technology, allowed the creation of an implant that would precisely fill the defect in Edward’s chest.

Mr Bishay sent CT scans of Edward’s chest to Anatomics Pty Ltd in Melbourne, Australia, who are world leaders in the design and manufacture of bespoke surgical implants.

Their designs were then sent to CSIRO where they were fed into a 3D printer. This printer has a chamber filled with powdered titanium, and the particles are fused together layer by layer by an electron beam.

The printed sternum was then returned to Anatomics for processing and cleaning and was coated in porous polyethylene – a substance manufactured to create a bone-like porous architecture and which also helps with tissue adhesion. Finally, the implant was sterilised and shipped to the UK.

Having made sure that Edward was now infection free, the team at Heartlands Hospital were able to operate.

The procedure began with plastic, reconstructive surgeon, Mr Haitham Khalil, opening up Edward’s chest and removing the muscle flap that had been offering some limited protection to his organs. Then Mr Bishay fitted the new sternum into place.

After a few minor adjustments the perfect fit was achieved. As the team had hoped, the process was quicker and the fit better than it would have been with a traditional mesh and cement implant.

Although the procedure was a success, the team were keen to find out what impact this new kind of implant would have on Edward’s movement and breathing – would it match, or perhaps even improve on, the functionality of traditional implants?

To establish this, Dr Nicola Oswald tested Edward’s breathing and chest function at various stages before and after the surgery. One of these tests involved the use of motion capture cameras which revealed exactly how his chest moved during breathing.

Before the procedure, these tests showed that when Edward was inhaling parts of his chest were moving inwards instead of outwards. But after the operation this had been corrected and his breathing and movement were in synchrony again.

3D printing offers great potential for the future of surgery – not only can parts be created that precisely fit a particular patient, but the materials used can minimise the risk of infection. For thoracic surgeons like Mr Bishay, this technology is exciting because it could allow them to commission bigger and more complex implants to help patients like Edward, and to help patients who have lost bones due to chest wall tumours.

This procedure was only the first of its kind in the UK and the second in the world – so it’s going to be fascinating to see how this technology develops.