As part of Radio 2 Beatles, a four-day celebration of the Fab Four and their enduring legacy, Janice Long and Greg James counted down the Top 60 UK Beatles Digital Chart - the most downloaded and streamed songs from the band's extensive catalogue of hits, compiled by the Official Charts Company. 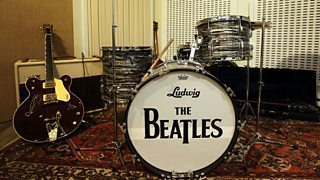 Discover the top ten below, and the rest of the chart elsewhere on this page.

Did you know? The Beatles' twelfth chart-topper, spent three weeks at No.1 in 1967, after it was premiered during 'Our World', the first live global TV broadcast. It doesn't feature on any of The Beatles' studio LPs, although is used in their film 'Yellow Submarine' and appears on the subsequent soundtrack album. In 1999, the song was chosen as the anthem to herald the new millennium in Britain, being performed as the Queen arrived to open London's Millennium Dome. Paul McCartney also performed it at the Queen's Golden Jubilee Concert in 2002.

Did you know? 'Yesterday' is the most covered song of all time, according to the Guinness Book of Records. It had the working title 'Scrambled Eggs' - while developing the track’s melody McCartney wrote some temporary lyrics for it - about scrambled eggs - and named it after the breakfast favourite: "Scrambled eggs, oh, my baby, how I love your legs…"

It first appeared on The Beatles' 1965 LP Help, but wasn't initially released as a single in the UK (although it was in the US, where it topped the Billboard chart). It was eventually released in 1976, when EMI re-issued all of The Beatles' singles, plus 'Yesterday'. The song was voted the best song of the 20th century in a 1999 BBC Radio 2 poll of music experts. The track also gave its title to the 2019 Danny Boyle movie, 'Yesterday', starring Himish Patel (who presents 'The Abbey Road Story' on Radio 2 Beatles.)

Did you know? 'In My Life' originally appears on Side Two of The Beatles' 1965 LP 'Rubber Soul', and features John Lennon on lead vocals. It was never released as a single, but finally made the UK charts when The Beatles back catalogue was made available for download in 2010. In 2000, it was voted the best song of all time in a poll of songwriters for the music magazine Mojo.

Did you know: The track appears on the band's 1968 double-album, commonly known as 'The White Album'. Although song-writing credits are shared by McCartney and Lennon, as per an agreement made in the band's early days, it's solely a Paul McCartney composition and he's the only Beatle that features on the track. McCartney revealed the civil rights movement in the US was the inspiration for the song.

Did you know? Help! is the opening track on the band's 1965 album of the same name, with John Lennon taking lead vocals. It also features in the band's second movie, also called Help! The track was memorably covered by Bananarama and Lananeeneenoonoo (aka French & Saunders and Kathy Burke) in 1989 in aid of Comic Relief.

Did you know? Although famed for writing many of the greatest songs of all time, The Beatles also covered a number of tracks by other artists, particularly in their early career. 'Twist and Shout' is the most downloaded/streamed of their covers in this chart. It was originally penned in 1961 by Phil Medley and Bert Berns, and first recorded by The Top Notes, before becoming a hit for The Isley Brothers in 1962. The Beatles' version, sung by John Lennon, appears as the final track on their debut album 'Please Please Me' in 1963, and was later released on an EP, also containing 'Do You Want to Know a Secret', 'A Taste of Honey', and 'There's a Place'. At the time there was a separate EP chart which this topped, while 'Twist and Shout' itself finally made the UK singles charts in 2010, based on download sales.

Did you know? 'Come Together', primarily written and sung by John Lennon, was released as a double a-side with the George Harrison penned 'Something' in 1969. Although it's gone on to be one of the band's most popular and enduring tracks, as demonstrated by its placing on this digital chart, at the time it ended a run of four consecutive UK No.1 singles (and a run dating back to 1964 of songs that reached either No. 1 or No. 2 in the UK singles chart). It's the opening track to the band's classic 1969 LP 'Abbey Road'.

Did you know? 'Hey Jude', primarily written and sung by Paul McCartney, topped the charts for two weeks in September 1968. It doesn't feature on any of the band's albums, with 'The White Album' released just a couple of months later. It's said that the song was originally called 'Hey Jules' and was written to cheer up John Lennon's then 5-year-old son Julian, when his parents were getting divorced. At over 7 minutes, it's The Beatles' longest single, and was also the first to be released on the band's Apple label.

Did you know? 'Let It Be' was released as the final single before The Beatles' split became public knowledge. It was taken from their 1970 LP of the same name, their final studio album to be released, although it was actually recorded before previous release 'Abbey Road'. Paul McCartney wrote the song, which was influenced by his mother Mary, who died when he was 14-years-old. It topped the chart in the US, where 'The Long and Winding Road' was released as an additional single from the same album. McCartney performed the song at the Queen's Diamond Jubilee Concert in 2012. The song did reach No.1 in 1987, when a charity collective, including McCartney, recorded a new version in the aftermath of the Zeebrugge Disaster.

Did you know? 'Here Comes The Sun' was never released as a single in the UK, only entering the UK chart on download sales in 2010. A cover version by Steve Harley & Cockney Rebel peaked at No.10 in 1976. George Harrison both wrote and sang lead vocals on the track, which is a rare Beatles song that doesn't feature John Lennon at all. It was the first song on the second side of their 1969 Abbey Road LP, and now holds the title of the No.1 Beatles digital song in the UK!