A British summer would not be complete without a barbeque – or two – or twenty! But with so much in the news telling us that barbequed meat is bad for our health, is there any way we can make the meat healthier? 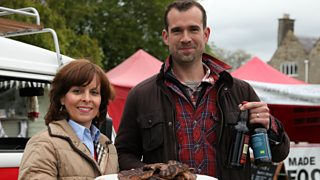 Dr Chris van Tulleken has made it his mission to find out what nasties are produced when we when barbeque our meat, and what we can do to reduce the dangerous effects. And the answer might be more pleasing to the taste buds than we think!

It is now well established within the scientific community that barbequed meat contains chemicals that can cause cancer. These are called carcinogens and there are two groups – heterocyclic amines (HAs) and polycyclic aromatic hydrocarbons (PAHs). Both form when meat like beef, pork or fish is cooked at high temperatures – such as in a pan or grilled. However because coal fired BBQs can get up to lofty temperatures of 300 degrees Celsius and they produce lots of smoke, barbequed meat can produce a high amount of HAs and PAHs.

It’s important to note that studies have not yet established a direct link between PAHs and cancer in humans, as there are so many variables that can influence why and how someone gets cancer, so it is incredibly difficult to research. However animal studies as well as human questionnaires have shown a link between consumption of PAHs or consumption of well done, fried or barbequed meats with a greater risk of some cancers, including colon cancer.

The carcinogens or cancer causing chemicals form mostly on the surface of barbeque meat and are produced in three ways:

It can sound a bit scary, but Isabel Ferreira, a food chemist from the University of Porto in Portugal has been studying how to reduce these cancer causing compounds during barbequing – specifically how to prevent the formation of PAHs.

Trust Me, I’m a Doctor asked Isabel to come over to demonstrate her discovery: that marinating your meats in beer can reduce the production of these carcinogens.

Samples 1 and 3 were marinated in the beer for 4 hours, then patted dry, before being cooked on coal fired barbeques for 10 minutes each, along with the unmarinated sample. Isabel then carried out some scientific analysis in a custom made lab inside in a campervan at a beer and barbeque festival!

The results were startling. Sample 2, the steak that was not marinated at all, fluoresced the most revealing itself to have the most PAHS. Samples 1 and 3, both of which were marinated in beer, fluoresced less, revealing that the PAH levels had been reduced by the beer marinade. Of the two different types of beer Chris & Isabel tested, the darker beer caused the greater reduction in PAHs.

Dr Ferreira usually does her work in Porto University in Portugal with slightly more accurate equipment, and she has measured a reduction in PAHs in meat from just a few hours’ soaking in beer before cooking of 53%.

It is still not completely understood how beer reduces the PAH content in BBQ meat, but there are a number of accepted theories. It is believed cancer causing chemicals form when high temperatures change organic compounds inside the meat into free radicals – which then rearrange themselves into PAHs. It’s thought that beer prevents the formation of these because beer contains radical scavengers in the form of antioxidants – which gobble up the free radicals. Whilst all beers have radical scavenging properties, dark beers have the most. It’s thought this is due to the type of fermentation, the presence of polyphenols from hop and malt, food colouring, and other additives. In addition, the moisture content from the marinade also prevents the meat from getting so hot.

There are lots of other things we can do to prevent the formation of carcinogenic compounds in our barbequed meat. We can scrape off the burned or charred bits from the surface of the meat, we can use lean meats to prevent the dripping of fat onto the hot embers, we can use a gas BBQ which doesn’t get up to the same high heats as a charcoal or wood BBQ and produces a lot less smoke, we can place the meat further away from the hot flame, or we can use other marinades – such as wine, garlic, and other spices. Indeed, Dr Ferreira has tested many different types of marinades in her lab and Portugal, but she has found beer to be the best at preventing the formation of PAHs.

So, it appears that beer and barbeques are a match made in heaven, at least when it comes to our health!