Can you tell us about your character in Summer of Rockets?
I play Kathleen Shaw. She is a politician’s wife and very much a woman of her time. Everybody in the show has secrets and we find out that Kathleen is also hiding something. But because of her position in society, and the fact her husband is a politician, it’s a secret that is kept within the family. This is very difficult for Kathleen, because she is the public face of the family, and must behave as though everything is fine. And of course, it isn't. 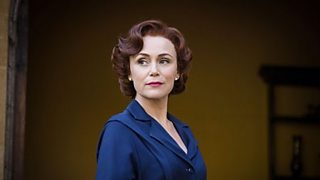 It looks extraordinary as well as being an incredible story

Is there anything particular you did to prepare for this role?
It’s all there in Stephen's wonderful writing. And we had a really luxurious three-week rehearsal period which was very intense, fun and productive. Usually with television, you don't get any rehearsal; generally you just go straight in. Stephen spends weeks with the actors sitting, talking, going through every aspect of the script. Therefore everyone is very well informed by the time we start. I felt incredibly well prepared.

When you were looking into the period (the late 1950s and the beginning of the Cold War) is there anything that stood out or surprised you?
The season’s debutantes being presented to the Queen and there being a huge cake brought out at Queen Charlotte’s Ball I had no idea about... I'm not sure how people don't know about that enormous cake! It’s extraordinary - it took about six people to wheel it out on set. It’s ridiculous and incredibly British and very old-fashioned.

And then of course there’s the fact this is very close to Stephen's heart and a very special piece for him. I’ve known Stephen for a long time and yet I had no idea about his father’s hearing aid business or that he was under surveillance by MI5. It is fascinating.

Is there a memorable moment that stands out?
All of it! It’s called Summer of Rockets and we filmed last year and could not have had a better summer. It really was extraordinary. There were endless beautiful locations and hugely ambitious locations - the cast and crew were filming on the Mall at 3am on a Sunday morning. When you’re watching those scenes, you would think its CGI, it’s incredible that they shot a period piece right there in front of Buckingham Palace. I'm still not quite sure how they managed that. They've done a brilliant job.

And the Shaw’s house and gardens were just breathtaking, amazingly beautiful.

And finally, can you sum up the series and why you think people should watch?
It’s semi-autobiographical and it’s about a really interesting period in history. It’s full of fascinating detail and the characters are beautifully drawn.

Also it's a love letter to film and TV, and really demonstrates Stephen’s great love for the medium.

There’s so much, it’s impossible to sum it up but: it looks extraordinary as well as being an incredible story. I’m very proud of it.