Can I really boost my immune system?

There seems to be a constant stream of articles in newspapers and on the internet suggesting that we can ‘boost’ our immune system by taking vitamins, minerals and probiotics, or by eating particular foods. But is this something we should be spending our money on? 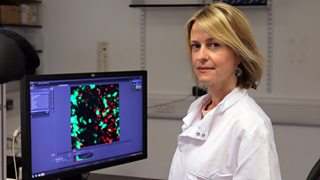 The notion that the immune system is something that we can easily influence is cast into doubt when you realise how complicated it really is. There are hundreds of different types of cells in the immune system doing a variety of jobs whether it’s identifying invaders, carrying messages, devouring known bacteria or learning how to fight new enemies.

Broadly there are two parts of the immune system: the innate response and the acquired response. The innate response judges friend from foe. It reacts to a problem by trying to flush out or burn out the invader and it’s this that can make us feel feverish or snotty.

The acquired response is more like the body’s SWAT team – when specific invaders have been recognised, this part of the immune system identifies the cells that can kill them and sends them into battle.

At Glasgow University, researchers are using laser microscopy to look at some of these cells as they move and interact in the immune system. What their work reveals, is just how complicated and integrated this response really is – throughout our bodies, all the time, different cell types are talking to each other, and there’s still a huge amount that we don’t understand about these diverse interactions.

So when we’re told that something can ‘boost’ our immune system we should probably be asking ourselves which bit of the system it’s claiming to boost, how it claims to do it, and crucially, what’s the proof? And most of the time robust scientific evidence is hard to find.

We need vitamins and minerals to keep our immune systems healthy. So those of us who are deficient in say vitamin D or vitamin C, may need to take them as supplements. However, vitamins and minerals can be found in good amounts in food, so if we’re eating a healthy diet, chances are we’re getting the amount we need, and there’s no evidence to suggest that boosting your vitamin levels any further will give you advanced disease fighting powers.

In fact when it comes to some vitamins and minerals, it’s actually possible to have too much of a good thing – excess vitamin A for example, is toxic and can be lethal.

Research has also looked at whether things like Echinacea, selenium, beta-carotene, green tea, bioflavonoids, garlic, and wheatgrass supplements can help us see off germs. The problem is that the evidence that exists is not strong – there haven’t been many studies, and a lot of them have been criticised for being badly designed and therefore not providing solid evidence.

What’s more, even if these things were shown to alter our immune system in some way, this doesn’t mean that they will improve our ability to combat disease. What we really need are well conducted trials to test whether a treatment can actually help prevent infections or make them less serious.

Probiotic products contain ‘good bacteria’ that are supposed to improve our gut health. In the past these products were linked to improving the immune system, but the European Food Safety Authority has ruled that they can’t claim to improve immune function because of a lack of scientific evidence.

As research on the gut microbiome continues, it’s likely that we will come to understand more about how our gut bacteria can influence the immune system, but for now the jury is still out.

The importance of balance

Instead of concentrating on ‘boosting’ the immune system, a more useful approach might be to think about ‘balance’, as a healthy immune system is one that sits in balance.

We can think about the immune system as a scale running from ‘underactive’ to ‘overactive’. We know that an immune system that is not functioning properly is a bad thing – for example it plays an important role in HIV and Malaria. But at the other extreme, an ‘overactive’ immune system can start targeting our own cells.

In extreme cases, this causes autoimmune diseases like rheumatoid arthritis and multiple sclerosis. But an overly vigorous immune response can also cause inflammation – which can be thought of as collateral damage, or friendly fire, from the war between the immune system and invading pathogens.

Serious illnesses and deaths caused by infections are often due to damage that comes from an over-vigorous immune response.

So should I try to boost my immune system?

Rather than thinking about boosting the immune system, it’s probably better to think about keeping it healthy and balanced, and when it comes to deciding whether to buy products to help with that, it’s probably a good idea to maintain a degree of scepticism.

Vitamin and mineral supplements can help if you’re deficient in something specific, but if you’re eating a healthy balanced diet and taking regular exercise you’re probably already doing enough to keep your immune system in good shape.

One way which is proven to improve immune response is vaccination.

This involves giving people harmless versions of the pathogens you want them to be protected against so that their immune system remembers them and learns to recognise them quickly.

This means that their immune system will know how to fight these pathogens if they ever encounter them for real.