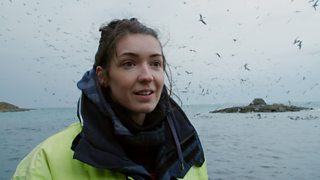 Our current knowledge of orca – killer whales – has been greatly added to by common scientific methods such as photographic identification, studying their acoustics and tracking them using satellite tags. Yet, most of orcas’ lives occur underwater and therefore out-of-sight. Because it’s much more difficult to study these animals below the waves, their behaviour underwater has remained poorly investigated and understood, so far. But recent technology, including what scientists call ’bio-logging’, has opened up the possibility of innovative studies.

Attaching a miniaturised data-loggers to a marine mammal allows us to record motion data in three axes, giving us fine-scale insights into its horizontal and vertical movements. It also keeps track of the animals position using Argos or GPS locations, how deep it dives, what speed it is moving at. All this data is displayed in a 3-D representation of what the tagged animal has been doing while we can’t actually see it. And the most advanced data-loggers even include a camera. 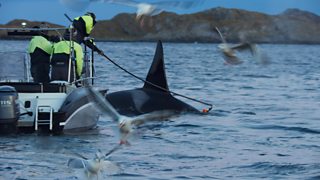 Eventually, several tags deployed successfully in November 2016 – and even more importantly, were found again once they automatically released after two days. This resulted in the very first footage obtained from the back of Norwegian killer whales.

This amazing 4K footage has revealed several feeding strategies used by killer whales during the winter season, when herring are in high abundance in the fjords. These include co-operative carousel-feeding, shallow-feeding and scavenging around purse-seine nets. The footage also reveals how family members interact with each other underwater and what proportion of their time they allocate to feeding, travelling and socialising.

Camera tags attached facing forward have even revealed how much fish a killer whale may consume. These tags have produced large and labour-intensive data-sets which we will be analysing further to reveal new details about these behaviours.

Understanding how killer whales use their environment, how much they rely on herring and what challenges they may be facing is crucial for the long-term conservation of this population. Camera data-loggers deployed on Norwegian killer whales, contributing to both science and raising awareness through the combined use of data and footage, constitute a powerful and innovative tool. 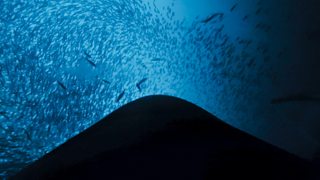 And the images obtained also constitute a unique perspective from the killer whale’s point of view.