A new book of photographs from the Jim Marshall Archive celebrates the Johnny Cash albums At Folsom Prison and At San Quentin. With exclusive access, Marshall documented the rebirth of the star 50 years ago - and captured one of the most iconic music photos of the 20th Century.

In Johnny Cash at Folsom and San Quentin, images captured by music photographer Jim Marshall offer a definitive view of Cash’s redemptive prison concerts recorded at Folsom in 1968 and San Quentin in 1969, both in California.

I think the prisoners really appreciated that Cash was there for them, and he really believed that he was doing something right
Jim Marshall

Before Cash came to make these celebrated recordings his career was on the slide. He had won and lost the respect of the country music establishment, fans had dissipated due to no-shows by the man himself, and his family feared for his survival owing to drug addiction and a penchant for creating havoc.

After one chaotic night in the mid-60s, driven by despair and fuelled by stimulants, Cash sought refuge in a Tennessee cave and battled his demons. The outcome was a literal re-awakening, and he walked from the cave with a burning passion and something to prove.

Supported by Bob Johnston of Columbia Records, Cash was offered the chance he’d been waiting for since Folsom Prison Blues became a hit for him in 1956: the chance to record an album in a prison. Three recordings were set, two at Folsom on January 13, 1968 and one at San Quentin the following year.

Cash loved the photography of Jim Marshall and invited him to cover the experience. Marshall understood the relationship between Cash and his audience. He said: “I think the prisoners really appreciated that Cash was there for them, and he really believed that he was doing something right. He wanted to make a difference in these guy’s lives.”

The resulting albums re-established Cash as a country music icon, building on his legendary live fearlessness, and the images caught by Marshall made that legend all the more enduring by documenting the evolution of the Man in Black. 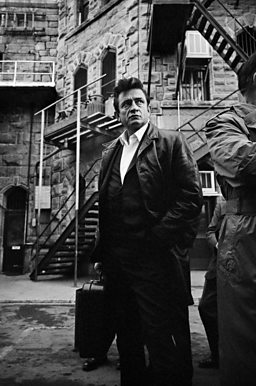 This image of Cash performing at Folsom is considered by Country music singer Marty Stuart to be "one of the greatest performance shots ever taken of a musician at work". | Photo: Jim Marshall / Reel Art Press

June Carter Cash on the sidelines. Cash's bassist Marshall Grant noted: "Despite the precautions it was pretty scary at Folsom, especially since June was with us, and she was pretty uptight about being there." | Photo: Jim Marshall / Reel Art Press 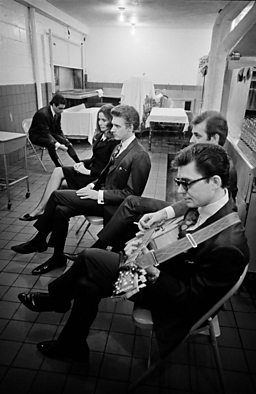 Harold Reid of the Statler Brothers - Cash's backing singers - adjusts his sock in the background as June and the rest of the Statlers anxiously await the start of the show | Photo: Jim Marshall / Reel Art Press 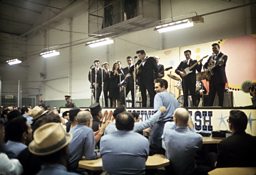 Inmate A-59795 of Folsom Prison, Glen Sherley, jumps out of his chair after hearing his song Greystone Chapel performed by Cash and the band. Sherley was unaware that Cash had been given the lyrics and rehearsed the song the day before. Cash would continue to support Sherley, helping him to record an album in Vacaville Prison where he was moved after Folsom. His own story is an interesting one. | Photo: Jim Marshall / Reel Art Press

The mood begins to lighten after the two shows at Folsom Prison - the sense of relief is palpable. | Photo: Jim Marshall / Reel Art Press

A happier arrival at San Quentin on 24 February 1969. Between the Folsom and San Quentin concerts Cash had kicked his predilection for amphetamines, found God and married June Carter Cash. The image of the Man in Black had started to coalesce and his confidence grew with the album At Folsom Prison hitting the top of the country music charts. | Photo: Jim Marshall / Reel Art Press

Cash, in a prison jumpsuit, leads June, her family and the band in rehearsals at San Quentin. | Photo: Jim Marshall / Reel Art Press

A Granada TV crew from the UK hunker down to capture the audience response while Cash holds them in the palm of his hand. | Photo: Jim Marshall / Reel Art Press

Like every good story, the myth behind this image has many fathers and a variety of versions. The shot was taken by Marshall as he chronicled Cash’s rehearsal and performance at San Quentin in 1969. Deemed too risky at the time by his label Columbia, the image remained relatively unseen for the next few decades.

By the early 90s, Cash’s career was in decline but in 1994 producer Rick Rubin, known for his work with Run DMC and The Beastie Boys, led yet another resurgence in Cash’s career.

Cash’s American Recordings (1994) and Unchained (1996) brought critical and commercial success but were largely ignored by country music fans. Both albums won Grammy awards and around the same time Marshall released a book of his photography which contained the photo.

In response to the Grammy wins Rubin took out a full-page ad of the image in Billboard magazine. In the top-left corner the message read: “American Recordings and Johnny Cash would like to acknowledge the Nashville music establishment and country radio for your support.” It caused an uproar and the image has appeared on posters and T-shirts ever since.

But why did Cash flip the finger in the first place? Was it frustration or was it at Marshall himself? In 2000 Cash volunteered that it stemmed from irritation at the Granada TV documentary crew blocking his view of the audience, but if you see the contact sheet from that day you know the still was taken during rehearsals, not the performance.

Marshall offered another possibility in 2006: “I said, ‘John, let’s do one for the Warden,’ and he flipped the bird.” Either way, as Marshall pointed out: “It shows John’s individuality, but the gesture was definitely done in jest.”

San Quentin was a tougher option, with a discernible sense of danger, but the relationship between Cash and the prisoners remained the same.

As June Carter Cash pointed out: “John had these men in suspense, they were mesmerised, hypnotised and spellbound, and so were we. San Quentin was their song and Johnny Cash was theirs, and they decided not to riot that day. He held them by a thread, and we were saved by that thread.”