Sir David Attenborough is a man whose achievements are well celebrated. And yet, he continues to surprise us with unexpected delights and fascinating gems of knowledge.

For example, we learned from his Jo Whiley and Simon Mayo interview that he’s releasing an album, titled David Attenborough - My Field Recordings from Across the Planet, which he recorded during his early years of lugging a big recording machine across the globe for nature documentaries.

"Back in the 50s, we took the very first tape recorder that could work without mains supply... to record monkeys, birds and insects, but we also met some very interesting people and musicians," he explained. "Almost wherever we went, people had never heard a recording of themselves and it was always a bit of a mystery."

"I remember when I was recording some drums in West Africa, and the head musician didn't like it at all – he thought I was stealing his thunder. And he said 'I don’t think your machine is much, can your machine learn this music?', and we recorded it and played it back and he said, 'yes but that was a really easy piece to learn'. Then he played something really fast and when I played it back to him, he was amazed."

"It was a great privilege... We got a whole variety of stuff, and it was great fun!" 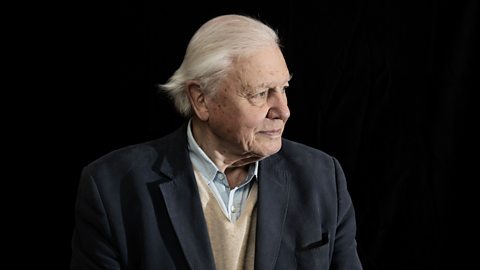 So there you have, Sir David Attenborough: broadcaster, naturalist, national treasure and now globetrotting musician.

With this in mind, here are some other ways this extraordinary man has surprised us over the years, as well as the important things we've learned from his astonishing work.

Attenborough's contribution to Jeremy Vine's What Makes Us Human? podcast contains many interesting stories of his early life: his parents took in refugees from the Spanish Civil War and helped Jewish children from Europe escape to America. In fact they even looked after two girls when it became impossible to arrange further transportation for them during the Second World War.

Sir David also offers an insight into his budding career that proves to us that we all have to start somewhere: even if your first job is wildly different to where you wish to end up. A young Attenborough arrived at the BBC at the dawn of television production, and was one of a handful of employees working on non-fiction shows on British TV, including a knitting show: "Ah! The old days... Those were the days. 'Knit one, purl one'".

2. Humans have the ability to howl like a wolf

One of Attenborough's great skills as a broadcaster is the ability to put humanity back into the natural world. And for shows such as Life on Earth and The Life of Mammals, this meant going into the wild himself, and interacting with the animals they were there to film.

This clip from Life of Mammals shows Sir David himself demonstrating the wolf howl, in order to communicate with a pack out in the wild. And while none of us are blessed with lupine hearing, it's clear from the speedy reaction he gets that he can speak their language pretty well.

And speaking of impressions... 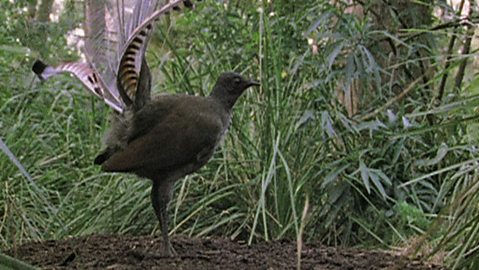 The superb lyrebird reproduces the sounds of the forest.

For 1998's The Life of Birds, Attenborough visited a forest in southern Australia to see a bird with a song that actually mimics the calls of other birds.

His resulting footage of the lyrebird is outright startling. The male lyrebird can not only mimic the song of up to 20 other species of birds - as part of its elaborate courtship ritual - it picks up natural sounds from its environment and copies them too. In this case, that means camera shutters, car alarms, and the chainsaws of nearby foresters. 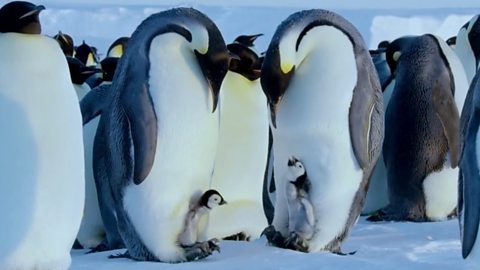 Why the BBC rescued ill-fated penguins

Attenborough agreed with decision to save penguins' lives

For a recent episode of Attenborough's current BBC series Dynasties, his crew had been filming emperor penguins when they were horrified to discover that a raft of the aquatic birds had become stuck in a slippery ravine, after being blown there by a storm. Under normal circumstances, it would have been deemed a bad idea to intervene. But in this instance the crew felt compelled to help, and did so by digging a stepped trench so that the penguins could walk out to safety.

And while Sir David has often said that nature must normally be allowed to take its course, in this case, series executive producer Mike Gunton says that Attenborough would have acted similarly, telling BBC News: "I was speaking to David about it yesterday and he said he would have done the same."

5. A polar bear and walrus battle is a close affair 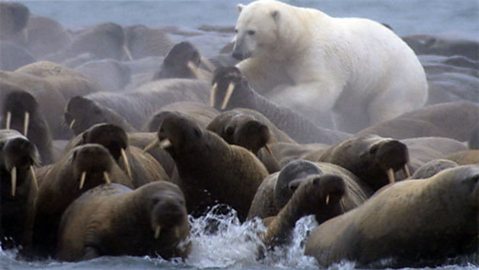 It sounds like a school playground debate: who would win in a fight between a polar bear and a walrus? Well, according to this footage from Attenborough's Planet Earth, it's a close call.

According to Sir David, the bear's jaws can't quite hold onto its mammoth prey long enough to bring it down, and the walrus is too interested in getting away to start a proper battle. Usually, the polar bears would be looking for walrus cubs, so to see this one attempt to bring down a fully grown adult is a remarkable achievement. 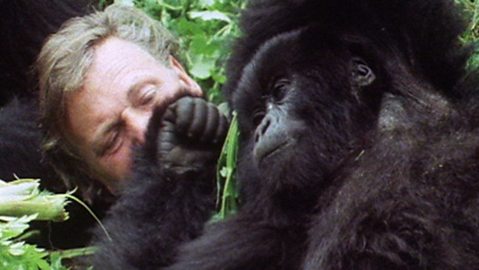 Memorable moments with one of the rarest great apes.

This is among the most memorable of TV moments in Attenborough's vast archive. For Life on Earth, Sir David travelled through the volcanic forests of Rwanda and Zaire, filming himself crawling through leaves and trees among a band of gorillas.

The footage is mesmerising enough without the rising suspicion that these powerful beasts could easily take exception to the filming of a television show in the middle of their afternoon siesta. "You have to behave properly, and you mustn't conceal yourself too well. If you suddenly appeared close to them, and took them by surprise, then they would almost certainly charge," Sir David says in the clip.

However, Attenborough also argues how gorillas are much like humans. "There's plenty of time for play," he explains. Sometimes they even allow others to join in." And then, who should appear underneath one of the younger of these gently purring Goliaths than David himself?

One young gorilla spreads across Attenborough's body in a sort-of hug, while another tries to remove the presenter's shoes. But Sir David warns: "Though they may play games, you don't forget that these are the rules of the forest and the great Silverback is the king."

7. Believe it or not, butterflies love oregano 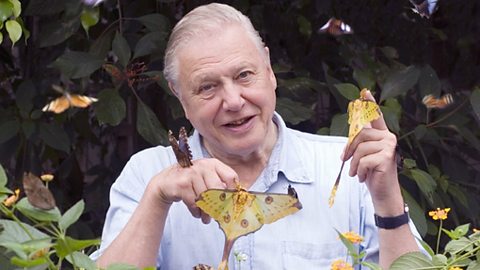 The legendary naturalist on why he's spending 15 minutes a day counting butterflies.

Another community-minded natural history project Sir David was happy to lend his voice to was the national campaign to survey the country's butterfly population, to see how many of them there are and encourage them to breed. To that end, he recommends spending 15 minutes a day outside with a butterfly chart, noting the different species as they flutter by.

Attenborough also recommends planting the kind of flowers butterflies like, including oregano and lavender and even (with caution) buddleia.

8. Snakes on a beach are truly terrifying 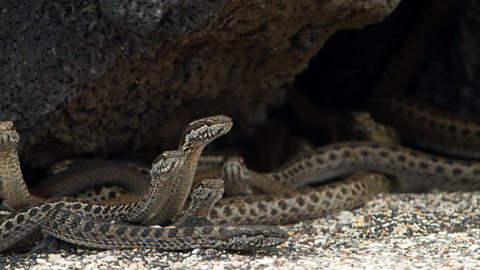 For racer snakes, the emergence of marine iguana hatchlings is a feeding bonanza.

The television moment of 2017 (it went on to win a BAFTA) was this thrilling chase from Attenborough's Planet Earth II, as a newly-hatched iguana emerges from under the beach in which its eggs were laid, and then tries to get to the safety of the rocks. The only trouble is, there's a gang of racer snakes that fancy said iguana for a spot of lunch.

When it first aired, households all over the country could be heard yelling encouragement to the plucky little lizard, and when he finally reached safety, viewers spontaneously erupted into loud celebrations, with the fervour of a last-minute sporting victory.

9. We need to cut down on plastic, and fast 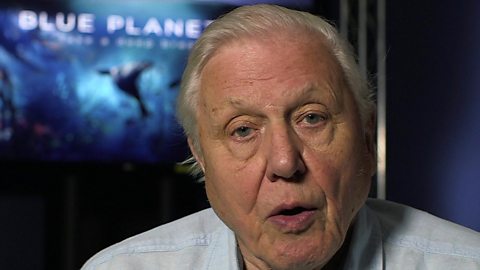 Attenborough's documentaries often tell us a lot we didn't know about the animal kingdom, but they also reflect upon how we as humans are changing the planet too. The final episode of 2017's Blue Planet II contained a stark warning - if humans don't stop pumping single-use plastics into the ocean, it will have catastrophic consequences. Or as Sir David put it: "The future of all life now depends on us."

This, as the clip above relates, caused a huge and immediate reaction; leading to business pledges to cut down on plastic use, questions in Parliament, and a sudden public push in the direction of cleaner oceans. Such action may not have happened if it wasn't for Attenborough's shining spotlight.

10. Sir David would take a piano to a desert island

Finally, let's return to Sir David's surprising musicality. Only two people have appeared on Desert Island Discs four times: Attenborough is one, and late comedian Arthur Askey the other.

Although the music he's chosen has varied over the years, his choice of luxury item has been the same twice. He chose a piano in 1957, binoculars in 1979, a guitar in 1998, and back to the piano again for his most recent visit in 2012. His book choice has always been very apt - WB Lord's Shifts and Expedients of Camp Life, Travel and Exploration.

Listen to Radio 2 on BBC Sounds, or find out other ways you can listen.