BBC Two
Back in Time for Tea
Main content

BBC Two has sent the Ellis family from Bradford on a northern time-travelling adventure to experience what life was like for working-class families over the past 100 years.

Previously BBC Two sent the Robshaw family Back in Time for Dinner to experience what a middle-class family in London cooked in their kitchen.

But round these parts as dinner is the meal you have at noontime, let’s go Back in Time for Tea. Here are some of the favourite things we learned from the series.

The Ellis Family: Freya, Lesley, Jon, Harvey and Caitlin go on a time-travelling adventure from their Bradford kitchen.

1. A woman's place wasn’t just in the kitchen

Unlike her middle-class counterpart, a working-class woman in 1918 was expected to earn her crust as well as bake it. After a hard shift at the mill, Lesley was expected to get in the kitchen to feed husband Jon and their three children; Freya, Caitlin and Harvey.

2. You got more for your money

Housing costs are generally more reasonable in the North and in 1918 this was no different. Back then only 10% of a Northerner’s income went on rent, compared to around 30% today.

3. The North was the first to get free healthcare for all

Almost 70 years ago, on 5th July 1948, Park Hospital in Manchester became the first hospital in the world to offer free healthcare for all. The National Health Service was born.

A recruitment drive for nurses was launched to fill 48,000 nursing and midwifery posts. This meant exciting employment opportunities for young women up and down the country. By 1951 11% of NHS nurses were from Lancashire alone.

4. From the North to the nation

After years of ‘BBC English’ being broadcast over the airwaves, on 9th December 1960 ITV and Manchester’s Granada Television revolutionised programming with the launch of an exciting new series.

Coronation Street, with a Northern community at its heart, was central to Granada Television’s continuing vision to put the North on the map. The soap quickly spread from the North West playing to a national audience of 22 million viewers twice a week. It remains the longest running soap in the world.

The coffee bars and clubs in the North became a hive of creativity in the Swinging Sixties. An explosion of Northern pop stars proved to Northern teens that there was a life beyond the factories and the professions of their parents.

And with Liverpool lads The Beatles dominating the global music charts, anything was now possible.

6. The right to roam

Many potential ramblers were put off visiting the local countryside by ‘no trespassing’ signs put up by landowners.

The North was a key battleground in the fight for our right to roam. In 1932, 500 men and women took part in a mass trespass of Kinder Scout in Derbyshire. Five men were jailed, and it was a contributing factor in the creation of the Peak District as the UK’s first National Park in 1951.

7. The right to protest

The North hasn't only fought for access to land, there has been a proud tradition of protest for workers' and civil rights over the past 100 years.

Including the 1925 Bradford Strike where drastically falling wages caused 150,000 miners to walk out; the hunger marches in the 20s and 30s, most notably when around 200 men walked all the way from Jarrow in County Durham to London to personally hand a petition to parliament; and, of course, the miners' strike of 1984-85.

8. The right to party

In the 70s while disco fever was sweeping the nation, the youth in the North found their own way to express themselves. They rejected mainstream musical offerings in favour of obscure soul music from America. Thousands flocked to all-dayers and all-nighters at venues like the Blackpool Mecca, Manchester's Twisted Wheel and Wigan Casino.

Northern Soul: with the distinctive freestyle dance moves and fast-tempo soul records was a way for Northern teenagers to dance their cares away and find their own working-class lives reflected in the black soul music of industrial America.

At the start of the Ellises' time-travelling experiment, their diet can only be described as bland. After World War I an average working-class family were buying 26 pounds of bread and 20 pounds of potatoes a week. Stodge heavy!

However, as leisure-time and disposable income increased over the decades, the family were able to treat their taste buds to far-flung food offerings. Waves of immigration over the 20th century introduced British palettes to international cuisines, which have now become a fixture of the modern diet.

Chinese immigrants had traditionally operated laundries, but in the 60s as more households owned washing machines a new business was required. Chinese entrepreneurs realised that Northerners didn't have anywhere to go after the pubs closed. In response, they offered late-night table service with a menu adapted for the British clientele.

From the 50s onwards, mass immigration from the Indian subcontinent also spiced up our teatimes. Initially coming to fill the labour requirements in the textile mills of Lancashire and Yorkshire, they also brought new foods with them that would influence British cuisine forever. Chip naan, anyone? 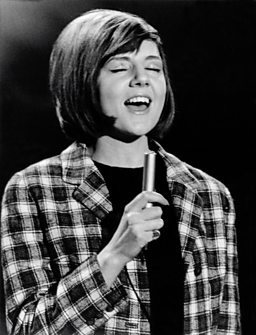 Liverpool lass Cilla Black found her big break at the Cavern Club, which also launched the careers of other 60s stars including The Beatles.

Weekends in the 50s 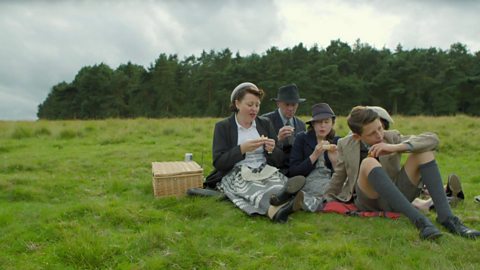 A picnic that peaks with pop

A picnic in the picturesque Peak District puts some sparkle and pop into the Ellis’ life. 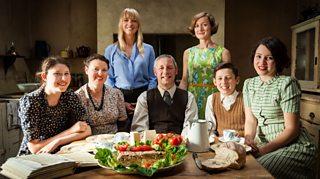 See how the Ellis family got on. Back in Time for Tea: Episode 1 (1918-1939) starts at 8pm, 6 February on BBC Two, and will be available to watch on BBC iPlayer shortly afterwards.

More Back in Time for Tea