‘Unsolicited sexual poetry has no place in my DMs’

Many women have found dick pics lurking, uninvited, like house spiders, in their social media inboxes. I am, however, regularly confronted with unsolicited poetry.

I have been working as a spoken-word poet for my entire adult life. It’s a quirky job, and one phenomenon that I have noticed in my career is that strangers will quite often claim acquaintanceship with me. This, of course, happens when you see someone perform work of an intimate or vulnerable nature, especially if you connect with it on a personal level.

But the apparent openness of the performance poet is something of an illusion. Yes, the art form often involves relaying relatable human experiences and sharing dark thoughts, deep emotions or even trauma, but the poet is inviting the audience into their life on their own terms. The writer chooses which details to divulge and how they are to be framed.

Perhaps it is this performed accessibility that emboldens men to send me their poetry. I want to clarify that these are never poems dedicated to me personally. I am not fending off suitors. That would be much more fun! No, it is generally men whom I’ve never met before and it happens several times a month.

One particularly shudder-inducing incident was when I was nineteen and a video that I created with BBC Loop was doing the rounds online. A fifty-something man messaged me to inform me that his favourite word was 'devour'. Later, when I was starring in a Nationwide advert, a man in Chile contacted me to show me his poem written from the perspective of Van Gogh's missing ear.

Over the years, I’ve had many boys send me screeds of late-night, drunken, stream-of-consciousness verse.

Would you ask a stranger for feedback on your pornography? Does pornography become art if it rhymes?

Many men have slurred beer-scented odes into my ear at house parties. Several strangers have even intruded my table and shoved a poem under my nose to be read, at once. I have been non-consensually recited at more times than I can remember.

I understand that I am treading a fine, and potentially elitist, line here. Art is, and should be, about sharing and everyone deserves to have their writing heard. Hell, I stand on a stage and expect a room full of strangers to sit and quietly listen to me go on about my bloody feelings for half-an-hour at a time!

We were all novices at some point and we improve as artists by helping one another. I have solicited help and advice, and I have been more than happy to provide help and advice where able. 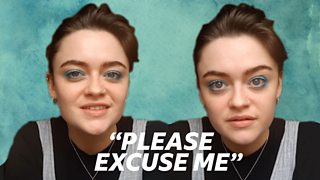 There is a difference between reaching out with good faith and respect, and just demanding feedback in a stranger's inbox. I took to twitter to ask fellow writers for their similar experiences and the consensus seemed to be that it is indeed almost always men that do this. Unsolicited poetry, manuscripts and first drafts are received by women writers far more than male writers. The male writers who did receive them, however, also got them mostly from other men.

I took this information out with me and stomped around in my thinking boots for a while, attempting to understand why this might be, and I have concluded that it might come down to who we feel owes us their attention, and who we feel does not.

If I may be permitted to generalise for just a moment, men are not raised to confide in one another in the way that women are. This means that men will often turn to the women in their lives for assurance, amateur counselling or life advice. Conversely, women are expected to be people-pleasers who are charitable with their time and attention. It is for the same reason, I think, that several female colleagues of mine, who create work about past experiences of sexual assault, often receive messages from men confessing to historical consent infractions, seeking, I suppose, some kind of absolution. I truly believe that this is not usually done with disrespectful intent and is, instead, an example of behaviour that has not been properly interrogated. My callout on twitter for similar stories showed me that these messages can put people in an awkward position, attempting to maintain personal boundaries yet not wanting to hurt anyone's feelings.

However, last week I received a poem from a man I have never met that was so explicitly sexual that it made me quite uncomfortable.

Before you reach out, ask yourself, are you sincerely seeking feedback or is this titillation? Have you asked permission? Are you ignoring someone's personal boundaries?

Would you ask a stranger for feedback on your pornography? Does pornography become art if it rhymes? Is this really any different from a surprise dick pic? I would urge us all to remember our god-given right to tell people to piss off.

All I can say is that creative people are some of the most charitable I know. Many are already juggling one hundred hats, already saying yes to too much, already burning out. We are all floundering, working hard to keep our heads above water in a country that does not value creative labour or value just how much labour actually goes into creative work. None of us are getting paid enough. We must help one another and build supportive and collaborative creative communities. Art is not about the individual.

But, before you reach out, ask yourself, are you sincerely seeking feedback or is this titillation? Have you asked permission? Are you ignoring someone's personal boundaries? And, if you do reach out and you don't get a response, try and not be too offended. Chances are, like being stoned at an all-you-can-eat buffet, that person has too much on their plate. Times are tough. Let's all try to be respectful to one another.