These Terms were updated as of 23rd September 2021 and apply only to the 2021 series of Strictly Come Dancing.

Please note you cannot vote from this page. When the vote opens, head to the Strictly homepage.

Where to vote online

When the vote is open, shimmy over to the Strictly homepage. You’ll find the vote at the top of the page. But remember, the page you're currently reading just provides the instructions - it's not the voting page and you cannot cast your vote from here.

1. Get ready to vote

Before you can vote, you need to be signed in with your BBC account. If you're a Strictly superfan and voted online last year, then provided you're using the same device, you should still be signed in and ready to vote! If you've never voted online before then you'll need to register for a BBC account in order to vote or, if you already have an account but haven’t visited the BBC in a while, you may need to sign in again before you vote for the first time.

You can register from the Strictly homepage during the show, or any time at bbc.com/register.

Make sure you’re registered, signed-in and ready in plenty of time before the vote opens... or you’ll have Craig to answer to!

When the vote is open, it will appear at the top of the Strictly homepage. If you can’t see it, try refreshing the page.

The couples will be listed in alphabetical order.

To cast your votes, select your favourite dancing duo by clicking the ‘plus (+)’ icon next to their name so that a ‘1’ appears in the box between the ‘plus (+)’ and ‘minus (-)’ buttons. You can allocate all your permitted votes the same time by clicking the ‘+’ button again for another couple or the same couple you have already allocated a vote to. If you want to remove your vote from any couple, just use the ‘-’ button next to their name. 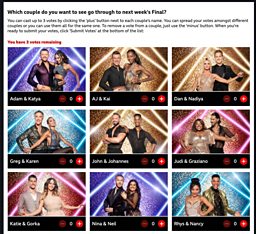 Once you’ve allocated all your votes you won’t be able to press the ‘+’ button anymore. If you’re happy with how your votes are allocated then click ‘Submit X Votes’ at the bottom. The button will confirm how many votes you will be submitting in one go eg. ‘Submit 3 votes’. You can now cast all your votes at once, or cast them one at a time as you did last year. Once you have submitted your vote or votes it cannot be changed. 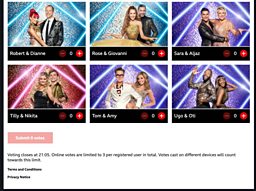 If you have submitted all your votes in one go then you won’t be able to vote again. If you have chosen to vote one at a time or in multiple submissions then you can use the ‘VOTE AGAIN’ button, as you did last year, to cast your remaining votes until the button has disappeared and you have reached the maximum number of votes.

If you don’t want to vote online you can still vote by phone. The phone numbers will be given out in the show and be made available on the Strictly homepage whilst the vote is open.

In the Final, our superstar couples will be dancing more than once so don’t forget to wait to vote until you’ve seen all their spectacular routines, as once your votes are gone, they’re gone!