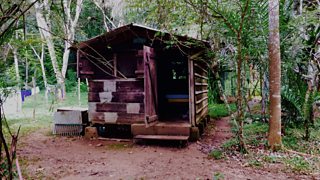 Home for the duration of the filming. At night you could hear the chimps in the forest communicating to each other.

Capturing onboard footage from a chimpanzee was the first thing we attempted for the series, so when I arrived in Cameroon in West Africa armed with eight Go Pros and a briefcase full of screws, Velcro and Gorilla Glue I didn’t really comprehend the full scale of what we were trying to achieve yet.

Scientist Mimi Swift had already been on the ground for a few months working with these chimpanzees at Sanaga-Yong Rescue Centre, trying to encourage them to get used to wearing some kind of harness or collar, which would later hold the camera.

As desperate as we all were to jump straight in and start handing out the cameras, it wasn’t that simple. In order to work closely with chimpanzees, they need to trust and feel comfortable around you, so we began spending time with the young orphan Kimbang. We would visit her each day to introduce ourselves, feed her some milk and groom each other. This way she would get used to our presence and the grooming would establish trust and strengthen our friendship bond. After a few days of playing, insect plucking and piggy backs, we had been accepted and were ready to get started with our camera mission.

The main thing I learnt within the first few days was patience; it was like trying to work with young children with short attention spans and a mind of their own. Wearing the camera had to be fun for these chimpanzees, because as soon as they realised that what they were doing was ‘work’, any kind of cooperation would go out of the window. 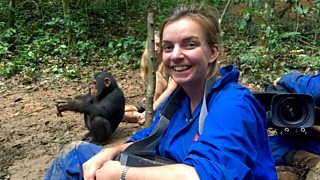 Spending time working so closely with young orphan chimpanzee Kimbang definitely made up for all the camera frustrations.

We quickly learnt that getting a chimp to wear a camera was no small task... The difference between the chimpanzees wanting to wear the cameras and not wanting to wear them was miniscule and could change every few minutes, or the second that something or someone more exciting came along.

We made it our daily mission to come up with ideas to make the cameras seem like the most exciting toy in the world; we wore them ourselves and danced around like we were having the best time (in the same way you might pretend to a child that vegetables are the tastiest thing on earth); we rubbed mango soap onto the harness so that they were excited by the fruity smell; and we even put tiny mirrors in the back of the camera housing, so that they would want to hold onto it (mirrors in the chimp world are literally the best thing on offer!).

The cameras couldn’t just be handed out left, right and centre; for chimps, hierarchy is everything. We had to give the cameras out in a special pecking order otherwise there would be upset and jealousy between them all. The smaller chimps waited patiently for their turn to get hold of this new exciting toy, whilst the older chimps fought over any tiny apparent difference between their cameras.

We soon realised that the only way to have peace amongst the group was to make sure that everything was identical. We only had eight cameras but there were more chimps, so ‘dummy’ harnesses were given out to certain chimps with an empty camera housing to ensure that no one felt left out. 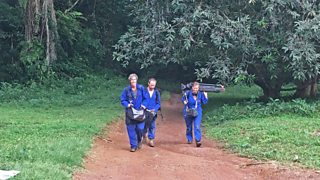 Heading back to camp after an afternoon filming with Kimbang in the jungle.

We also didn’t realise how dextrous these animals could be. Any teeny crack or hole in the housing was something to play with and pry open, and the chimpanzees quickly learnt to change the camera settings from video to photo mode, providing us with thousands of ‘selfies’ and not a second of video footage! The whole time we were trying to outsmart these incredibly intelligent animals, so the next day we removed the camera buttons and tried again…

Even how the chimps wore their harnesses had its own difficulties. It was important to us that the chimpanzees could put the cameras on and off themselves so they were never forced to wear them, but letting chimpanzees style themselves brought even more challenges. It was like witnessing a chimp fashion show; some wore the cameras as a belt around their waist, some around their necks, others stylishly wanted to drape them like a scarf around their shoulders and some insisted on holding it in their hands or feet at all times. Watching a chimp disappear into the jungle with the camera facing their chest was particularly frustrating! Chris Watts, our camera technician, even devised a new system where the chimps had TWO cameras facing in opposite directions, so that whichever way they wore it, there was a chance that one would be facing in a watchable direction. But after two weeks of coaching, coaxing and cajoling we were still struggling to capture anything more than the chimpanzees admiring their new item of clothing.

If all that sounds hard, retrieving the cameras back again from the chimps was a whole other challenge. Suddenly, these cameras that took so much convincing to wear in the first place became a precious item that they didn’t want to give back! Luckily, Mimi had a friend on the inside, a chimp called Anita, who was the goody-two-shoes of the group and would sneakily bring the cameras back to us when the other chimps weren’t looking. 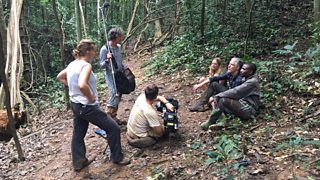 The crew in the forest in Cameroon, waiting for Kimbang to come back from the tree tops.

As for the cameras that had been abandoned in the jungle, there was only one thing for it… Each morning we would crawl through the forest, whatever the weather, on hands and knees and through the biting soldier ants and overgrown bush, looking for a needle in a tropical haystack. Fortunately, Chris had yet another great idea to hide a Bluetooth key finder inside the camera harness, so as long as we could get within a 10m range (easier said than done) we had a chance of finding the cameras and hopefully some amazing chimp-eye-view footage.

It took nearly three weeks of wading through chimp selfie after chimp selfie and hours of video footage of cameras facing the ground before we had any luck. A camera was discovered on one of our morning jungle searches lying underneath a tree. This was a good sign. If it was dropped at the bottom of a tree then the chances of a chimpanzee wearing the camera up the tree were certainly likely. We all held our breath as we swapped out the battery and turned it on. What we saw completely blew our minds. We had began to give up on the hope of capturing anything so to watch a chimpanzee exploring the canopy and playing amongst the trees with her fellow chimps was out of this world. Even now I remember that moment, feeling so privileged to see the world through their eyes. It definitely made all the sleepless nights, hours of drilling and numerous mosquito bites worth it. I feel extremely fortunate to have been able to spend so much time working closely with these incredible chimpanzees and to form such a bond with the young orphan Kimbang. To witness their lives from their viewpoint with our cameras truly made this experience unforgettable.