Stranger than fiction: Five of the biggest literary scandals

Storyville documentary The Great Literary Scandal: The JT Leroy Story tells the remarkable story of the transgender author who became the darling of the literary world - before it was revealed he was a persona invented by writer Laura Albert. With literary scandals having a long and illustrious pedigree, SIMON RICHARDSON takes a look at five of the most notable.

Savannah Knoop, AKA JT LeRoy, with Bono (courtesy of Dogwoof)

JT LeRoy was the nom de plume of Laura Albert, a 35-year-old Brooklyn author who, around the year 2000, wrote several books, short stories and articles that became hugely popular for their uncompromising accounts of the lives of an underclass of drug addicts, truck drivers and prostitutes in the American South.

Albert fabricated an exotic identity for LeRoy, who his followers believed was a transgender, HIV positive, teenage prostitute pimped by his mother in the truck stops of West Virginia.

As 'his' novels grew in popularity and he gained cult status, Albert asked her sister-in-law to start making appearances as LeRoy in disguise.

When you see the images of the supposed LeRoy in sunglasses and wig it’s hard to see how anyone fell for it.

Albert and a team of co-conspirators managed to sustain the illusion for several years, even duping a variety of celebrity pals including Courtney Love, Billy Corgan, Shirley Manson and Carrie Fisher into accepting them into their lives.

The truth was eventually revealed by Stephen Beachy in a 2005 article in New York Magazine. In 2007 Albert was found guilty of fraud for signing the contract for the movie adaptation of one of the novels she wrote as LeRoy under a false name.

Possibly the most overt critique of the system of literary PR and reviewing, New York radio personality Jean Shepherd’s prank began in 1956 on his late night New York radio show.

What do you say tomorrow morning each one of us walk into a bookstore and ask for a book each of us knows doesn’t exist?
Jean Shepherd

Frustrated by a system that valued requests for forthcoming books in bookstores as highly as actual sales, he wanted to demonstrate how a sensation could be produced artificially.

“What do you say tomorrow morning each one of us walk into a bookstore and ask for a book each of us knows doesn’t exist?” he asked his listeners.

The response was overwhelming. Ideas for the title were phoned in and Shepherd settled on I, Libertine.

Faced with a barrage of requests, baffled booksellers sent questions up the food chain and soon demand for the phony novel saw it placed on the New York Times bestseller list.

The prank was eventually revealed by the Wall Street Journal but not before the publisher Ian Ballantine, of Ballantine Books, had commissioned a new title of the same name to capitalise on the craze. The proceeds were given to charity.

Cover of first paperback edition of I, Libertine.

Fooled by what must be the most audacious literary fraud in history, The Sunday Times announced in 1983 that it was in possession of Adolf Hitler’s personal diaries covering the entire war.

German reporter Gerd Heinemann claimed to have unearthed the diaries which were reportedly lost when a Junkers transport plane, evacuating a hoard of the Fuhrer’s personal possessions during his last stand in Berlin in 1945, crashed near the German-Czechoslovak border.

Although several authorities on the history of the war, including leading historian Hugh Trevor Roper, had privately begun to express doubts about the authenticity of the diaries, Sunday Times proprietor Rupert Murdoch is said to have insisted that the newspaper publish the sensational scoop anyway.

Although it took several sophisticated analyses to finally prove the hoax, some obvious errors were later referred to by those who had handled the diaries, such as incorrect use of Hitler’s initials and the fact that they were all presented in an identical cheap exercise book format that would be difficult to source across a number of years.

The Sunday Times resolutely defended the authenticity of the documents for a fortnight before backing down.

In 1796 opinion of the work of William Shakespeare was briefly reshaped by the ‘discovery’ of a hoard of documents, including several plays, apparently written by the bard.

As is often the case with such sensational ‘discoveries’, things quickly got out of hand

Law clerk William Henry Ireland claimed to have found the documents in a trunk. They included plays Vortigern and Rowena and Henry II and, even more sensationally, a 'Profession of Faith' in which Shakespeare declared himself a Protestant.

The son of an author and engraver who was himself obsessed by Shakespeare’s work, it was said Ireland junior fabricated the fraud to impress his father.

As is often the case with such sensational ‘discoveries’, things quickly got out of hand and soon the Drury Lane Theatre was planning a production of Vortigern. The production was practically laughed off the stage.

Like Rupert Murdoch with The Hitler Diaries, it is believed the theatre doubted the authenticity of the play but went ahead anyway, presumably to sell tickets. Nonetheless Ireland’s father claimed until his death that the documents were authentic. 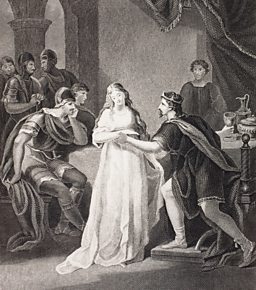 5. The Tales of Ossian

In 1762 James Macpherson published Fingal, an Ancient Epic Poem in Six Books, together with Several Other Poems composed by Ossian, the Son of Fingal, translated from the Gaelic Language, purporting to be a modern translation of the work of a third-century Gaelic poet.

Unfortunately, when challenged, Macpherson was unable to present the source texts he claimed to have in his possession

This was a rousing tale of Scottish heroism apparently handed down across scores of generations in remarkably intact form and codified by Macpherson during his travels in the Highlands.

Edinburgh’s intellectuals, basking in the city’s status as the crucible of The Enlightenment, fell upon the opportunity to celebrate the work of a Scottish epic poet to rival the civilisations of Greece and Rome.

The subsequent influence of Ossian’s ‘work’ can’t be overstated: some argue Macpherson’s were the founding texts of the European Romantic Movement, inspiring writers like Goethe, who translated in into German. Napoleon is said to have carried a copy of Ossian into battle, and in Britain Matthew Arnold, William Blake, Walter Scott and Elizabeth Barrett Browning sang its praises.

Unfortunately, when challenged, Macpherson was unable to present the source texts he claimed to have in his possession. Some dismissed him as a fantasist, but to others the work - even if only an amalgam - should be appreciated in its own right, or as an early example of oral history.

Storyville's The Great Literary Scandal: The JT Leroy Story is on BBC Four at 23:00 on Wednesday 1 February, and on BBC iPlayer thereafter.

A version of this article was originally published on 2 August 2016. 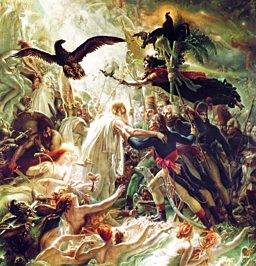