The read through for Oxygen took place on Wednesday, 12 October, 2016 with shooting starting on the following Monday, 17 October. It wrapped on Friday, 18 November. This, of course, doesn’t include the brief flashbacks to Knock Knock where in her mind’s eye, Bill glimpses the photograph of her mum. 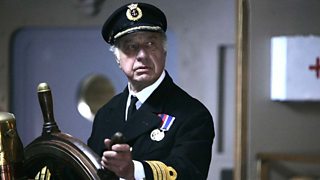 Geoffrey Palmer as Captain Hardacker in Voyage of the Damned

The student who questions the Doctor at the end of his lecture was played by Lauren Pate, who’s one of Doctor Who’s Assistant Directors. Lauren told us, ‘I've been so incredibly lucky to work behind the scenes on Doctor Who these 10 months, and to be able to be in front of the camera was ridiculously exciting... and totally nerve wracking! I'm not sure if I was in that lecture hall that I would be questioning the Doctor on anything!’

Oxygen is directed by Charles Palmer who previously helmed Smith and Jones, The Shakespeare Code, Human Nature and The Family of Blood. He’s the son of Geoffrey Palmer who appeared in Doctor Who and the Silurians, The Mutants and Voyage of the Damned.

‘Space… the final frontier…’ The Doctor is quoting the start of the voice-over used to begin the vast majority of Star Trek and Star Trek: TNG episodes. It was also heard in the final episode of Star Trek: Enterprise. It’s not the first time the adventures of Kirk and company have been referenced in Doctor Who. In The Empty Child, Rose memorably urged the Doctor, ‘Give me some ‘Spock’, for once! Would it kill you?’

‘Death, where is thy sting?’ When the Doctor murmurs these words he’s quoting the Bible; more specifically, the First Epistle to the Corinthians. 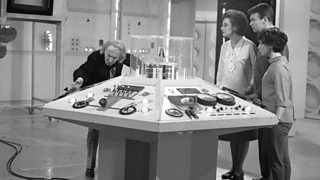 The First Doctor in the TARDIS with Barbara, Ian and Susan in The Dead Planet

The fluid links were first mentioned in the The Dead Planet, back in 1963. In that episode, the Doctor implied his ship couldn’t go anywhere without fully operational links which needed mercury to function... Mercury, which couldn’t be found in the TARDIS and necessitated an exploration of the world they’d landed on. It later transpired this was a ruse, allowing him to investigate – against the wishes of his fellow-travellers – an alien city they’d previously discovered but not visited. Incidentally, the planet was Skaro and later in the adventure the Doctor encountered the Daleks for the first time…

And in The Dead Planet the fault locator gives the fluid links a designation of K7. In Oxygen the link is called ‘fluid link K57’.

Branding throughout the station that appears in Oxygen suggests that Chasm Forge, its suits and systems were created by Ganymede Systems. It’s possible that the organisation is connected to ‘Ganymede Beacon’ - a human-owned space station mentioned in Revenge of the Cybermen. Ganymede is also one of Jupiter’s moons and in The Hand of Fear the Doctor uses a ‘Ganymede driver’ when he’s attempting to repair the TARDIS thermo-couplings.

The Twelfth Doctor previously played with a yo-yo in The Girl Who Died, the series 9 episode co-written by Jamie Mathieson, who also wrote Oxygen. The Fourth Doctor regularly showed off his skills with a yo-yo and even lent one to Leela, who misunderstood the purpose of the toy, believing it was ‘part of the magic’ that allowed the TARDIS to function… 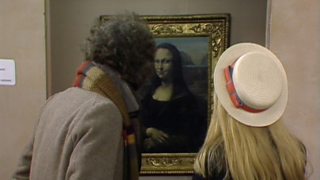 When she’s in the TARDIS, we see Bill reading a book on Leonardo da Vinci. In City of Death we discovered the Doctor and Leonardo were friends and the Eighth Doctor told Grace Holloway, ‘He had a cold when he drew that…’ after glimpsing a sketch by Leonardo in her home. The celebrated artist’s most famous work, the Mona Lisa (also known as La Gioconda), is a central plot point in both City of Death and Mona Lisa’s Revenge – the fifth story in the third series of The Sarah Jane Adventures. Fun fact – Leonardo shares the same birthday as Maisie Williams! Coincidence? Errr, yeah. Probably.