What Is Modest Fashion?

The profile of modest fashion is rising. Historically dressing conservatively has been at odds with what’s considered ‘cool’ in Western fashion trends, but more considered, covered looks are increasingly becoming more appealing to young adults.

Specifically in the case of young Muslim women, more and more style-conscious ladies are experimenting with ways to express themselves while still respecting and adhering to Islamic requirements. The focus is on interpreting Western identities alongside religious beliefs in a way that enables them to look good, feel confident, and to be part of both cultures.

Muslim modest fashion moves away from the traditional abaya. Often black, it’s a simple, loose robe-like dress traditionally worn by Muslim women. Modest fashion bloggers and vloggers are leading the way in giving young women a voice and a platform to express themselves while respecting their culture.

NabiilaBee is one such vlogger. Having amassed more than 16.5 million views on her YouTube channel and counting, she is a Muslim hijabi (referring to the hijab - a head covering worn in public by some Muslim women) pioneering conservative dress with a fashion-forward focus.

She spoke to ex-Girls Aloud member Nicola Roberts about her approach to modest fashion.

'Modest fashion is about covering yourself so as not to show your figure, but that doesn’t mean it has to be bulky or ugly.'

'Within Islam you cover your arms and legs, so nothing above your ankles or wrists. But there are no rules about colour, so I use colour to express my personality.'

'People often see Muslim women as oppressed, but we have options and choices and freedom to express ourselves in certain ways.'

'I started wearing a headscarf when I was nine. When I got to secondary school, I was bullied because people didn’t understand the culture. I was told I wasn’t pretty enough.’

'I didn’t want to take my scarf off because I strongly believe in it. I started to experiment with my dress and play with the style of my hijab to make myself feel better about wearing it.’

'I started doing hijab style YouTube tutorials because when I was young I didn’t have anyone to look up to. I didn’t want to take my scarf off – it’s not an accessory, it’s what I believe.'

'People started commenting that the tutorials were empowering them to wear their hijabs. It made me stronger and a better Muslim, and it also made me do more research into the religion.'

Nicola asked Nabiila if she ever felt out of place as a hijabi Muslim in the UK.

'I never felt out of place growing up, because I grew up in Birmingham where there are many Muslims and hijabis. However, as I got older and started to travel to other places I have felt judged.'

‘But this is me, and this is what I believe in and standing by those beliefs is really important.'

Like high street fashion, modest fashion means different things to different people. Modesty is also about behaviour and how you carry yourself. People interpret the boundaries differently, but it’s important to respect individual choice. 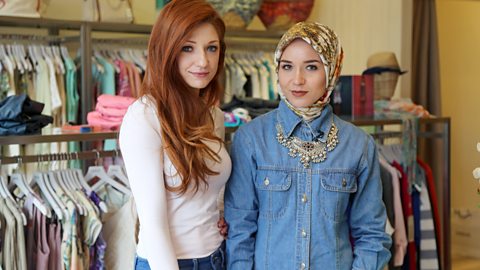 YouTuber Nabilla Bee speaks to Noreen about her fashion documentary with Nicola Roberts.