Of all the places in Japan that I have explored, there’s something unique about Hokkaido. Yes, it has some very interesting weather patterns - with very deep winter snows for world-class skiing to airy summer temperatures akin to those in England. Yes, it is one of the least crowded places you will go in Japan (some areas still use dial-up and don’t have access to cable TV!!) - Japanese like to use the term ‘oozora’, meaning wide open sky, as in you can see the horizon far in the distance without your landscape being interrupted by buildings. But its wildlife is also some of the most stunning that Japan has to offer.

About 2 years prior to filming I had explored Hokkaido myself with my camera, hitchhiking in a circle around the island, in the summer. I had done my close encounter with a brown bear (by accident), and I had searched for red-crowned cranes in the fields in the summer. But I’d never managed to catch a winter season, and seeing the majesty of a Steller’s sea eagle was at the top of my wildlife wish list in Japan. Naturally, when the opportunity arose I jumped at the chance to go out to film these beasts of beauty, and had to prepare for colder conditions than I was used to – one morning while filming the red-crowned cranes we managed a chilly minus 18.

Most people go to see the Steller’s sea eagles off the coast of Shiretoko, from boats departing from Rausu. But seeing as we were including the relationship with the fishermen that fished underneath the frozen lakes, we moved further south along the coast to see them. The first day we went filming, the sky was blue and although we spotted a few birds looking fierce and ferocious, something about it wasn’t quite right. It seemed… too peaceful, too easy, not wintery enough.

It seemed… too peaceful, too easy, not wintery enough
Ester de Roij

We tried for a few days to set up a hide close to a tree where we knew these birds would roost. But their distrust of foreign objects kept them at bay. And then the weather forecast turned and the snow started closing in. The first big snowfall of the winter season, fairly late this year, was heading our way, and the weight of the snow on the ice meant that our hide was no longer accessible – the risk of ice cracking was too high. A day or two we were out of action, and visibility was no more than a metre or two ahead of us.

Anxiety crept in as we had our last day to film with the fishermen and we were worried that they would cancel because of the weather. Luckily they could tell we really needed this, and they obligingly went and checked on a few nets on some of the safer areas near the shore. And it was in this weather that we were able to get some closer shots of these birds swooping down, fighting for a discarded morsel of fish in the roughest of conditions that they shone in their entire splendor. High winds made the harsh-looking weather even harsher, and the sight of the eagles walking across the ice with their vulture-like gait, threatening their neighbor and squawking in mid-air is one that to this day remains one of my fondest encounters of the series.

Oddly enough, my last shoot ended up being the deer rutting in early November about 9 months later, and one day when scanning the woods for a stag we came across a new Steller’s arrival sitting in peace, ready to overwinter once again on the bounty of the seas of Hokkaido and the charity of its inhabitants. 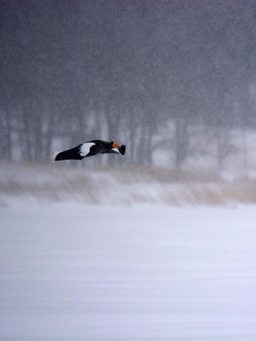 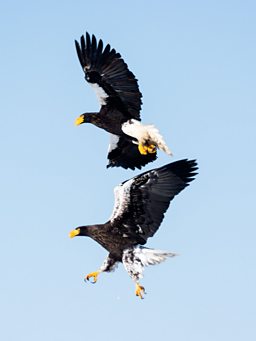