Can I lose weight by sleeping more?

When it comes to keeping our weight under control we naturally focus on diet and exercise, but intriguing research suggests that if we want to keep those calories in check we should also be looking at how much we sleep. 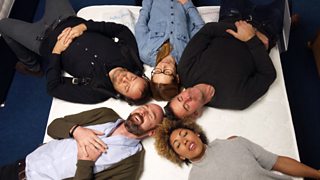 To test this theory for ourselves, we brought four volunteers to a location in the Kent countryside for two nights. Each volunteer experienced one night of undisturbed sleep and one night during which their sleep was severely disrupted by a baby doll programmed to cry through the night. We told our volunteers that we were investigating how sleep affects our mental abilities, when actually we were monitoring what they ate to see if the amount of sleep they were getting made any difference to their food choices.

We kept track of our volunteers’ food intake with carefully positioned cameras and our footage was analysed by nutritionists led by Dr Denise Robertson from the University of Surrey.

Three out of our four volunteers slept badly when they were taking care of the pretend babies. The next day, two of the volunteers ate more breakfast and chose less healthy options than they did when they got a good night’s sleep. The third volunteer who slept badly didn’t eat more, but did choose more sugary foods.

Our final volunteer got a good night’s sleep on both nights, despite the presence of the pretend baby, and chose to eat similar foods on both days.

Our experiment was only a small demo, not a scientific study, but the response of our volunteers was consistent with a recent analysis conducted by King’s College London which reviewed dozens of small studies involving sleep and appetite. It showed that, although not everyone is affected in the same way, on average getting less than seven hours of sleep a night led to people eating significantly more overall.

This is because a bad night’s sleep disrupts two key hunger hormones: it causes an increase in a hormone called ghrelin which drives hunger, and suppresses a hormone called leptin which is a satiety signal, telling us when we’re full. This combination leaves us feeling physically hungrier, and causes us to eat more.

What’s more, studies suggest that when we’re exposed to food while sleep deprived, there is increased activation in areas of the brain associated with reward. This can lead to us choosing foods that are higher in sugar and fat, rather than selecting healthy options.

All of this helps to explain why, in the long term, there’s a strong connection between poor sleep, weight gain and health problems like type 2 diabetes.

So, if you find yourself struggling to keep your weight under control, or if you can’t resist those sugary treats, think about increasing your hours of sleep – it could be an easy way to make a big difference.