Fall Guys: Why everyone’s getting obsessed

Fall Guys:Ultimate Knockout is a new hit battle royale/game show simulator that has taken the gaming world by storm.

Each episode starts with 60 players/Fall Guys competing to get to the end of the level, players are eliminated one by one (by falling off the platforms, being smashed by doors and so on) until a winner is crowned. After a successful beta, the official launch of the game saw it outsell GTA V on Steam and at one point it even had more viewers on Twitch than Fortnite.

So why is it so popular? Well, as well as being free as part of August’s PlayStation Plus offering, the game is deceptively simple. There are only really four controls, jump, grab, move and dive. Meaning that it’s incredibly easy for a beginner to make it through the opening few rounds. The fun comes as the player progresses through the levels - the tension ramps up and the room for error shrinks.

The game’s bright, colourful artstyle and shedload of costumes make it a lot more visually friendly than your typical palette of grey, green, black and beige battle royale shooters. A similar thing happened a few years ago with Fortnite, with its costumes and general sunnier outlook on life, it stood out from the crowd. In an age where streaming is so important to a game’s initial success, an instantly recognisable visual style is key.

The rounds include games like Whirligig where players must make a mad dash through fields of environmentally friendly destruction as wind turbines endeavour to launch them somewhere into the atmosphere.

I’m gonna let you in on a top tier Hexagon strategy as someone who has won over 20 times, drop straight to the bottom floor and take away all the tiles, then watch as your mortal enemies plunge to the ground while you laugh your way to victory.
Jordan

Door Dash, a new take on a Takeshi’s Castle staple, where the horde of lemmings aimlessly throw themselves at a series of doors trying their best not to smash every bone in their strange jelly bodies as it becomes clear they’ve picked the fake one.

See Saw which, if anything, is proof that schools really need to improve the curriculum when it comes to basic physics. Honestly, nothing in the last 30 years of gaming will make you scream at your TV louder than when you’re stuck with a group that doesn’t realise that if 10 of them are on one side and you’re on the other it’s going to tip all of you into the abyss.

Fruit Chute which involves running up a treadmill as everyone’s favourite fruits fly towards you, you know like watermelons, oranges, apples and of course, a giant wooden log.

The final rounds are where the game really ramps up in tension. My personal favourite, Hex-a-gon is a test of patience and platforming ability which evokes a game of ‘the floor is lava’ if you played it in a 7 story building with missing floorboards.

I’m gonna let you in on a top tier Hexagon strategy as someone who has won over 20 times, drop straight to the bottom floor and take away all the tiles, then watch as your mortal enemies plunge to the ground while you laugh your way to victory.

I now realise that by publicising this strategy I’ve doomed myself to have it used against me, but it’s honestly so funny to imagine the chorus of swear words leaving your enemies mouth as they plummet to their doom. I want to spread that enjoyment, we need a laugh these days. 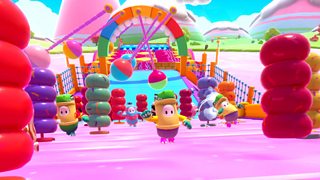 The real question is going to become how does the game remain relevant? Nothing stays this popular forever, and I think the developers know this, they’re expertly using their moment in the spotlight to push the game to as mainstream an audience as possible.

As I write there’s a bidding war going on for the right to have your own costume made for the game with the likes of streaming giant Ninja and YouTuber Mr Beast bidding hundreds of thousands of dollars, all of which is going to charity.

Don’t be surprised if there’s a boom in Fall Guys merch later this year.

They’ve already added a new finale game since launch and with the surge in funds the unbelievable success has surely led to, it doesn’t seem like it’ll be long before the list increases.

While only currently available on PlayStation 4 and PC, the team haven’t ruled out other platforms once their period of exclusivity runs out, and with this level of success, that’s unsurprising.

It’s the perfect counterpoint to this year’s massive story-driven titles like The Last Of Us Part 2 and Ghost of Tsushima, instead of having to dedicate hours of your time to those, you can jump into a game of Fall Guys and be finished in 20 minutes, or two, if you have a penchant for falling off of the side of things.