What the Battle of Salamis teaches us about identity

When I write these articles, I like to come up with a few quips. Something to ease the passage of information. I did think, “Salamis reads like the plural of salami but I couldn’t possibly make that joke, could I?” A quick tour of Twitter revealed that the hard work had been done for me...

*old professor voice*: now you young people might think the battle of salamis is something that occurred in the film "sausage party," ho ho

This week's In Our Time is called The Battle of Salamis but it's not about cured meats?

disappointed that this week's 'in our time' about 'the battle of salamis' isn't what i thought it was.

The Battle of Salamis took place in 480 BC, and is so called because it was fought by the island of Salamis, near Athens. What it really teaches us, or taught me, is about what national identity means and how we can use it.

Today, the idea of national pride is a major issue and the events surrounding the Battle of Salamis show how simultaneously important and irrelevant a sense of nationhood and nationality are.

While the battle was chiefly documented by Herodotus, a historian whose 2,500th birthday is coming up soon, the questions that Greeks and Persians asked of themselves at the time are strikingly similar to ones that many Europeans and people across the world ask themselves all the time: “Who am I? Where am I from? Which team am I on?”

Do listen - together with Marathon before and Plataea after, The Battle of Salamis preserved the origins of democracy and liberty

The Persian Empire was the largest the world had ever seen, and it extended to the Aegean by the 520s. Greeks (then known as the Hellenes) were snobbish about the Persians and considered them barbarians. However, many Greeks worked for the Persian Empire and in the Persian army.

Speaking as someone who is part Greek, I know first-hand of a specific suspicion of “xeno” – the foreigner – in some parts of Greece, no matter how exposed. Attitudes haven’t changed much in this regard over the last two and a half millennia.

This Greco-Persian co-existence led to the exchange of great ideas about science, maths and culture, but it wasn’t always a happy coupling. This is where the idea of opposing teams really reveals itself. Greek-speaking city states in Asia Minor revolted against the crown, burning the city of Sardis and temples of the mother goddess in 490. Persian leader Darius invaded Greece as retribution and to show muscle.

The Greco-Persian wars comprised four major battles and saw an overall victory for the Greeks, but many casualties too.

The Greeks were significantly outnumbered by the Persian Army, but they fought ferociously. Xerxes brought a massive fleet, thought to have been between 600 and 1200 ships, with each vessel carrying around 200 men. 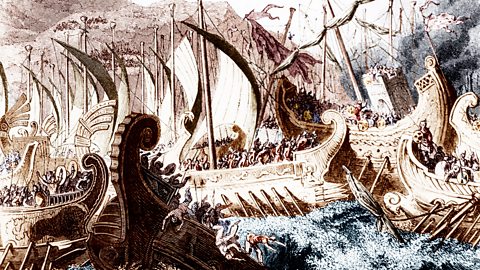 How did the Greeks defeat the Persians in the Battle of Salamis?

Lloyd Llewellyn-Jones suggests the Persians lacked the drive and fervour of the Greeks.

It makes little sense that the Greeks won, as a small number of them fought and they had fewer ships, but one theory is that they triumphed because they were fighting for their way of life. If Salamis had been lost, they knew they would never get it back, so they threw everything they had at the Persian invaders. In fact, there was even a saying after the victory: “How old were you when the Persians came?” It became a keystone for cultural identity even though a number of Greeks and Persians had been living side-by-side for years – the true importance of nationality and a sense of belonging overrode the previous collaboration.

In addition to this, Herodotus is the main source for the battles, but is Greek and so shows everything as either a real or a moral victory for the Greeks – and he doesn’t speak to any Persians. Who knows how far a sense of Greek identity has coloured what we know about the Battle?

Leading the Greeks was Themistocles who, it is believed, had to talk up the idea of fighting the Persians rather than retreating. The lines between Greeks and Persians were so blurred that Xerxes was being advised by a Greek woman, Artemisia, who warned him against rushing into the strait and whom he calamitously ignored.

Themistocles played on the sense of Greek nationality in a cunning fashion, and is thought to have erected huge billboards on the sides of cliffs telling Greeks in the Persian navy to turn coward and not fight against their fellow men. This tug of loyalty – often completely irrational – may have bolstered the Greek campaign.

This tug is something many of us can relate to. I find myself rooting for Greeks under any almost any circumstances and even when listening to the In Our Time podcast I was delighted to hear about a Greek victory. It doesn’t make much sense as I’m only a quarter Greek and this battle happened so long ago as to be irrelevant, but that doesn’t matter. The tug is still there. Even Edward Said’s analysis of the war in his 1978 book Orientalism shows that people today still have a stake in this ancient history – he argues that Aeschylus’s play about the battle contains representations of Eastern people as primitive, which academics on In Our Time disputed.

What does objectivity mean, and what does identity mean? How are we swayed in different directions, and how are our interpretations coloured?

The Battle of Salamis is a David and Goliath tale – the underdog is outnumbered but not outgunned – but it seems to me that it’s also a tale of identity. It makes me wonder: how much of our identity is shaped by where we’re from and how much is down to personal choice?

By the way I *still* think the Battle of Salamis sounds like bake-off for sausages....