From ancient pagan practices to more modern rituals, here are a few of the wonderfully quirky festive traditions observed by our fellow Europeans. Who knows, they might even inspire you to shake up the way you do Christmas this year...

Forget Santa: Icelandic children are visited at Christmas by 13 mischievous trolls or “Yule Lads”, the offspring of a murderous ogress called Grýla. Every year, children leave shoes in their windows for the 13 days before Christmas. Depending on how well the kids behave during this period, each of the Yule Lads will visit and leave either a small gift or a raw potato inside for the child to find the next morning. 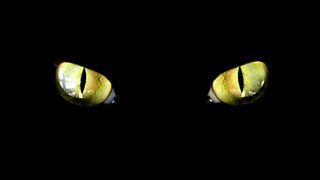 Grýla also owns a large black cat, Jólaköttur, who prowls through Iceland on Christmas Eve and devours anyone who doesn’t receive new clothes for Christmas. So don’t complain if you get given socks this Christmas – your life may depend on it.

Sweden has some charming Christmas traditions. For example, it’s customary to serve a Christmas Eve buffet of traditional foods including risgrynsgröt, a rice pudding flavoured with cinnamon. Hidden inside the serving dish is a single almond: whoever finds it will find true love in the year to come.

Perhaps harder for outsiders to understand is Sweden’s collective affection for Donald Duck. Every year at 3pm on 24 December, Swedes settle down after their Christmas meal to watch a 1958 festive edition of Donald Duck (“Kalle Anka”) on TV. The episode is always introduced live on Sweden’s main public service TV channel by a host, the Julvärd, who lights a candle and wishes the nation a happy Christmas before the episode starts.

It’s a tradition that started in 1959 and, while changes in the Julvärd line-up have provoked furious public debate, shows no sign of abating. It’s thought that over a third of the Swedish population tune in to watch every year. To put that in perspective, the Queen’s Speech had the UK’s single greatest share of TV audience in 2016 – and even then only 12% of the UK population watched it.

Krampus is a fearsome horned man-beast who stalks Alpine towns and villages in search of naughty children. With roots in pagan folklore that predate Santa Claus by centuries, Krampus arrives on 5 December – the Feast Day of St Nicholas – to the clanging of bells. He then prowls the streets, clanking with chains and brandishing a wooden switch.

Despite their considerable differences, St Nicholas and Krampus work as a team, with St Nicholas rewarding good children and Krampus scaring the living daylights out of everyone else. Nowadays many places host Krampusnacht parades like the one pictured above, where young men dressed up as the fearsome Krampus chase revellers through the streets. 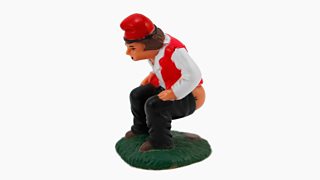 Picture a traditional nativity scene. The baby Jesus is in the manger with Mary and Joseph at his side; the shepherds and wise men look on while angels sing overhead and in the background, a lowly peasant lowers his trousers...

This is a caganer, and it has been a staple part of Catalan nativity scenes since the 18th century – always lurking in a corner. In fact, a popular Christmas game for children is to find the caganer, which might pop up in a different place every day during Advent.

Why? It’s not quite clear. Some say the defecating figure is a symbol of fertility and good fortune, while others maintain that its down-to-earth presence is a leveller: a reminder that at the end of the day, we’re all the same, nothing special.

5. Czech Republic, where some pets really are just for Christmas

Fried carp is one of the highlights of a traditional Czech Christmas Eve dinner, when it’s served up with lemon juice and potato salad. Obviously, the fresher the fish, the better – which is why, in the days leading up to Christmas Eve, many Czech bathtubs look like this.

Many Czechs (and people in neighbouring countries like Slovakia and Poland) now buy their carp ready to eat. But the tradition of bathtub carp still persists. Some families effectively keep the fish as pets until the morning of Christmas Eve, when they're transformed from faithful friends to lunch with the help of a kitchen mallet. 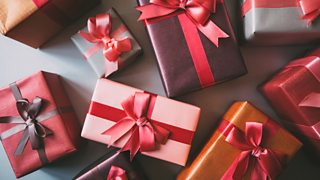 “Schrottwichteln” is a relatively new Christmas tradition in Germany, where it’s especially popular in workplaces and with the younger generation. It literally translates as “rubbish Secret Santa” and the idea is simple. Everyone selects something old, strange or generally a bit useless, wraps it up prettily and gives it to their assigned gift recipient (anonymously, of course).

It doesn’t even need to be bought new. Lots of people use the opportunity to get rid of objects that have been cluttering up their own houses. Whatever the source, Schrottwichtelners vie with each other to come up with the most twee, ugly or just plain ridiculous presents possible – think old ornaments, broken lamps or calendars with just a few days left on them.

Latvia’s burning of the Yule Log is one of the most heartwarming and cathartic Christmas traditions we’ve come across – something that can be done in the home or en masse by entire communities.

A special log is dragged around the house or town (or, in the countryside, from farm to farm), picking up all the problems and bad luck of the past year as it goes. At the end of its journey, the log is burned to symbolise the destruction of past ill fortune and to welcome in the light, warmth and opportunity of the year ahead.

Like many European Christmas traditions, the burning of the Yule Log is based on ancient pagan rituals – in this case, the celebration of the Winter Solstice just a few days before Christmas.

On Sunday 15 December, BBC Radio 3 broadcasts the 25th EBU annual day of concerts from around Europe – starting with a performance from the Vienna Hofburg, before moving on to Copenhagen, Madrid, Tartu, Helsinki, Reykjavik, Malmo, Stuttgart, Ljubljana, Gdansk, Riga, Merseberg, and Sofia. Christmas Around Europe will also be available on BBC Sounds for 30 days after broadcast.