I’ve lived in the Eskimo village of Kaktovik (in Alaska's far north) for more than ten years now, but I’ll be the first to admit it; my Inupiaq stinks. With all of its syllables and Qs, this Alaska Native language, for this native New Yorker, is impenetrable. 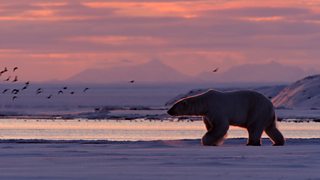 For me, behind the camera, the challenge...was not the cold. It was staying in focus.
Arthur Smith

That said, there are words whose meaning I know well and witness often. Somehow, these words sink in and stay. Take, for example alappaa that means cold. Oh yes, the cold. Great for polar bears, a little tough to shoot in. (Think cold-soaked cameras; lens-shivering winds; bare fingers navigating tiny buttons).

But then, there’s aarigaa, an exclamatory word that is a smile all by itself: “That’s good!” “How wonderful!” For me, aarigaa is earned. It happens after I’ve stood behind the camera all cold and windy day, waiting for the polar bears to rouse. Aarigaa happens at the exact moment my cold finger presses the red “record” button to capture a painting come to life; two cubs playing in the precious last of the lavender light.

Then, there’s the newest Inupiaq word I witnessed pitqusauraq. This one means, “to make overtures to be ‘caught’, responded to; to tease.”

Early one morning, I was set up a few miles from the village to film polar bears, when an Arctic fox stole the show. Though neither the bears nor I knew it yet, this fox was all about pitqusauraq.

While the polar bears were milling about (seemingly on their first cup of coffee), the fox circled wide around them at a surveilling trot. He picked his moment and burst on the scene, rushing one particular polar bear cub and darting just close enough to communicate “catch me if you can!” before he turned tail and ran over the smooth, snow-covered beachfront. The cub took the bait, and the game was on.

From that point, it was cat and mouse (er, cub and fox) as the pitqusauraq-ing continued. Zigzagging this way then that while casting backward glances to make sure the cub, panting in pursuit, didn’t lose interest; the fox was a relentless tease.

For me, behind the camera, the challenge on this morning was not the cold. It was staying in focus. The fox faked me out a few times, and there were some missed moments. But overall, I got the chase, which lasted about ten minutes.

I was just crossing my fingers that when I got home to the edit suite to review the material that enough of it would be in focus to tell the story. And, indeed it was. Aarigaa… 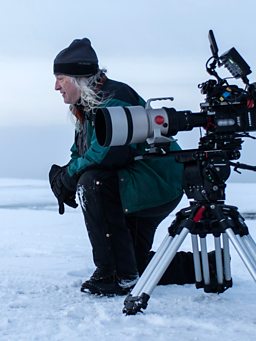