Eight of the world’s most expensive foods

As The Food Programme explores in ‘Britain's Secret Saffron Story’, the red spice is one of the world’s most expensive ingredients – worth more per ounce than gold.

But what other foods would give the sought-after spice a run for its money? What is it that makes these products so costly? And are they really worth their price tag? Here are a few of Planet Earth’s most expensive foodstuffs. How many have you tried?

If your rice is luminous yellow, then the chances are it’s been sharing a saucepan with saffron. The spice, nicknamed ‘Red Gold’, is the vivid crimson stigma (or threads) from a crocus flower, and it’s used as a colouring agent in food. Why does something so small cost so much? It is, weight for weight, more expensive than gold itself. The reasons are simple: Saffron crocuses only flower for a week or two a year in the autumn; harvesting the spice is labour intensive (it’s collected and processed by hand); and each small flower has only three stigma which means it takes around two football pitches of crocuses to create a kilogram of saffron. That’s as many as 300,000 flowers!

Caviar is the pickled roe of the sturgeon fish, and considered one of the world’s great delicacies. It’s tricky to handle and package but, more significantly, it’s incredibly rare. The most famous caviar is from the beluga sturgeon – found in the Caspian and the Black Sea. Now critically endangered, very little of its eggs can be sold legally. It takes up to two decades for the beluga sturgeon to reach maturity and it’s adult size! Even rarer is the roe from the albino sturgeon - now almost extinct in its native environment. According to the Guinness World Records, the most expensive caviar recorded is from an aged (possibly 100 year-old!) albino beluga sturgeon whose white caviar sold for about $34,500 per kilogram. My cod that’s steep!

Now considered a luxury, oysters haven’t always been the food of the filthy rich. In the early 19th century oysters were cheap as chips and an important food source for the working classes in coastal communities – a snack so plentiful that they were used to bulk out meat pies. 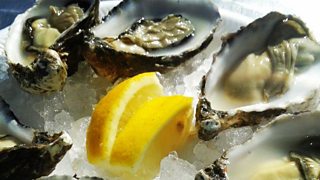 From abundant to rarity, the price of oysters has gone up considerably!

But overfishing and pollution have had a catastrophic effect on oyster stocks and scarcity has bumped up their value. A dozen in a top London seafood restaurant will set you back around £51.

It seems some people are happy to shell out for a slimy mollusc or two… Of course, you’re also buying the oyster’s infamous aphrodisiac qualities. Be careful who you dine with!

Found in the Piedmont region of Northern Italy, highly esteemed white truffles will only grow amongst the roots of certain trees, are much scarcer than any other type of truffle, and have a particularly intense flavour and aroma.

They can’t be cultivated or grown – although folk have tried for generations to farm the truffles, they can still only be sourced in the wild. It is this unpredictability, along with the lengths people go to to locate and harvest them, which results in their hefty price tag.

The record sum paid for a single white truffle was by Macau casino owner Stanley Ho in 2007. He splashed out $330,000 (£165,000) for one of the largest truffles uncovered in decades – weighing 1.5 kg. A pretty extraordinary price for a pungent underground fungus.

A type of cured ham produced in Spain and Portugal, the finest Iberico ham is from free range pigs that have a diet of only acorns during the last period of their life.

The classification of Iberico ham is extremely strict, with ‘black label’ ham considered to be the very best – produced from pure-bred Iberian pigs, roaming oak forests and feasting on acorns. On top of that, the ham is cured for a lengthy 36 months! According to the Guinness World Records, the most expensive leg of ham commercially available is an Iberian ‘Manchado de Jabugo’, retailing at a whopping £3,192.76 (as of 20 March 2016).

Although the pigs are reared for just three years, the ham legs are then cured for up to six!

Wagyu simply translates as ‘Japanese Beef’, and it can come from any of four different breeds of Japanese cow. The meat is intensely marbled with fat, which renders down during the cooking process to make the meat tender, moist and melt in the mouth. Some fans describe it as falling apart like a soft piece of fish. The high price point is all down to the rearing process: to qualify for the Wagyu mark the cows have to be reared and fed according to strict guidelines, with calves being given special feed to guarantee the signature fatty marbling. Kobe beef, one of the most highly-prized, fetches up to £500 a kg in Japan. That’s a lot of moo-ney.

OK, so technically it’s a drink. But with bags of kopi coffee selling for up to $700 per kg, it’s certainly worthy of its place on this list. Kopi luwak, or civet coffee, is made from coffee beans eaten, partly digested and then defecated by the Asian palm civet or civet cat. Doesn’t sound all that appetising? 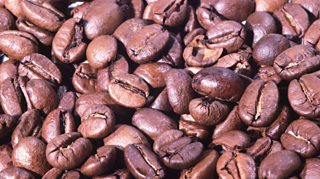 Always check where your coffee comes from.

Some believe that the part digestion and fermentation caused by the animal’s stomach acid enhances the flavour of the coffee, with other critics in agreement that it’s simply a gimmick resulting in a truly terrible espresso. Sadly, there are growing numbers of intensive civet farms, where animals are confined to cages much like battery hens, and force-fed.

It’s worth doing your research before buying.

Foie gras is a pricey pâté made from duck or goose liver that has been fattened (to up to ten times its normal size). The flavour is rich, buttery and delicate and the product expensive but the birds pay a higher price than we ever will – the geese and ducks are force-fed corn through feeding tubes.

It’s a practice dating back to as early as 2500 BC, when the ancient Egyptians learned that many birds could be fattened through forced overfeeding. These days many countries have laws against the practice, and the production, import or sale of foie gras.