Tweet Of The Day Returns - This Time It's Global

When Tweet Of The Day launched in 2013, it was only British birds that were chosen to lure the nation into wakefulness. Tweet Of The Day returns this September with the most interesting, distinctive and downright peculiar birdsong from around the world.

Editor’s note - There are 10,530 known species of bird in the world, how to choose the 120 species that will make the series? Series producer Andrew Dawes shares his thoughts about choosing the birds and making the programmes.

Some birds instantly came into mind, as they bring wonder and glamour to the natural world. Blue bird of paradise, blue footed booby, emperor penguin, resplendent quetzal slipped under the wire immediately. Others like the unique wrybill, or the blood sucking vampire finch, waited patiently in the wings as encore understudies.

The BBC’s Natural History Unit has been to every corner of the globe but amazingly some birdsong was not included in the back catalogue. What the BBC didn’t have, Macaulay Library in America did. The series had hatched.

I could only choose 120 bird species, therefore many will be missing, yet we hope to bring you the best of what the avian world has to offer around the world; the spectacular, the bizarre, the songsters or in some cases those we’re about to lose forever.

Here are some of the amazing birds who will open the series:

Hoatzins eat large quantities of leaves and fruit. To cope with this diet, their digestive system is more like that of ruminant mammals such as cattle. This fermentation process results in a manure-like odour, hence their alternative name of stink-bird.

The Wrybill is the only bird in the world whose bill is bent sideways… and always to the right.

As he struts and poses, the Superb Lyrebird unleashes a remarkable range of sounds. Up to 80% of these calls are imitations of the calls of other birds but they can also mimic chainsaws and the shutter of a tourist’s camera.

Like many birds of paradise, the male Blue Bird of Paradise has evolved an elaborate, noisy and colourful method of attracting a partner. As the female approaches its call eventually becomes a hypnotic mechanical buzzing, more like the song of a giant cicada than a bird.

Long term research has revealed that Scrub-Jays have extraordinary intelligence. If other jays are around, a bird will not hide food if it is being watched. It will even choose a quieter medium….sand rather than pebbles for example …to avoid revealing its hidden larder to sharp-eared competitors.

Sociable Weavers build some of the largest structures made by any bird – huge communal nests of twigs and dried grass which can weigh a hundred kilogrammes and house up to 100 pairs.

In spring the male blackbirds flutter their red and yellow wing-patches as they sing to announce their territories. It pays to advertise. For the males with the best voice and brightest epaulettes, the rewards are high a single male may chaperone up to 15 females.

The sound of party-poppers exploding in a forest clearing is a sure sign that White-Bearded Manakins are displaying. The male perches on a stem with his white beard feathers extended and leaps to another perch. As he does so he strikes the back of his wings together creating a loud snapping sound.

The plain Vogelkopf Bowerbird creates one of the most astonishing of all displays. His tent, thatched with twigs can stand a metre and a half high. On front of it he establishes a lawn of bright green moss on which he lays out his decorations. The female Vogelkop is looking for originality as well as variety

Male Australian Magpies are especially aggressive. Groups of them defend a nest site, with their beaks and stout claws they are responsible for many head injuries to cyclists and pedestrians each year. 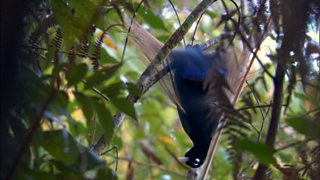 Discover birds through their songs and calls. Each Tweet of the Day begins with a call or song, followed by a story of fascinating ornithology inspired by the sound.

See all the birds featured in the series in September 2014