There's more to hear in pop music than stories of boy meets girl (or boy meets boy, girl meets girl etc) and it is becoming more common for musicians talk about mental health.

Already, we have people like Zayn Malik, Olly Alexander, Demi Lovato, Miley Cyrus and Lady Gaga who have spoken publicly about their experiences with mental health in interviews and on social media, but now we are hearing about it in lyrics too.

Here are three powerful songs which deal with mental health and a little advice on taking care of your own.

Find out more about Radio 1's My Mind And Me, we want to get you talking about what’s going on inside your head

Logic: "I want you to be alive, you don't gotta die"

Logic's collaboration with Alessia Cara and Khalid, 1-800-273-8255, is the biggest hit of his career so far. It also carries an important anti-suicide message.

It hit me, the power that I have as an artist with a voice
Logic

Logic has suffered from anxiety issues but this hit was inspired when he toured the US meeting fans and playing them new music.

"I was like, 'Man I wasn’t even trying to save nobody’s life.'

"And then it hit me, the power that I have as an artist with a voice. I wasn’t even trying to save your life. Now what can happened if I actually did?"

The lyrics of the song deal with severe depression and suicidal thoughts, with the song's chorus evolving from saying 'I don't want to be alive,' to 'I want you to be alive' to 'I finally want to be alive.'

"For many many years mental health hasn’t been talked about, especially in the male community.

JP says the deaths of Chester Bennington and Chris Cornell affected him greatly in 2017, and he hopes his cover of 1-800 will "touch someone" who may be struggling with their mental health.

"Often you don’t know what these people are going through and so just ask people how they’re doing," he says.

"Show people a little love, it goes a long way."

Why is it so important to hear people talk (or sing) about mental health?

"Sometimes we feel like it's only us that are experiencing these feelings or difficulties because in the past people haven't talked openly about mental health," says Dr Radha, Radio 1's resident expert.

"This can make our mental health worse and can isolate us even more because we don't feel we can talk about how we feel and ask for help.."

"When someone in the public eye talks about their challenges with mental health then it helps the feeling of isolation reduce and also helps us realise that anyone can experience them - however rich, seemingly-happy or successful," she adds.

"It helps us see we are not alone and that mental health affects us all no matter who we are."

Kesha: "No more monsters, I can breathe again"

After finding worldwide success with her single Tik Tok in 2009, Kesha became one of the biggest pop stars in the world during the early noughties. But in 2014 she filed a lawsuit against her former producer and mentor Dr Luke, accusing him of abusing her emotionally and physically during their time working together.

The legal battle made it impossible for Kesha to release new music until 2017, when she released Praying, a powerful ballad which dealt with the impact her experience had had on her.

"I think it’s healthy to actually talk about feeling really down sometimes because life can be a ******* ***** sometimes," she told Sirius FM after the release of Praying.

Praying has a positive message, where she forgives the person she writes about in the song.

"I'm proud of who I am, no more monsters, I can breathe again, and you said that I was done. Well, you were wrong and now the best is yet to come," she sings on one of the most distinctive pop singles of 2017.

It's much more common for younger artists to speak out about mental health issues, with campaigns in schools and even Radio 1's own My Mind & Me set up to encourage people talk about how they feel. But it's important people of all ages are encouraged to speak about what's affecting them, and Jay-Z spoke about mental health when he recently performed a Live Lounge session for Radio 1. 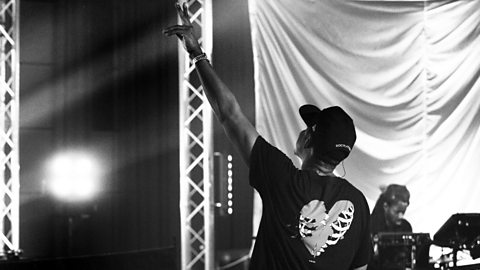 JAY-Z shares his personal thoughts on the importance of mental health.

He was speaking about his friend and former collaborator, Linkin Park's Chester Bennington, after performing their track Numb. Chester ended his life on 20 July 2017 after a long struggle with his mental health.

Linkin Park: "I drive myself crazy thinking everything's about me"

Heavy was the lead single from Linkin Park's 2017 album One More Light and was released five months before Chester Bennington took his own life. The song dealt with Chester's struggle with depression and he had spoken to Radio 1's Newsbeat after the song's release about how it had been inspired by the suicide of a friend.

Depression doesn't have a face or a mood
Talinda Bennington

"It was really hard and really confusing and really sad," the 41-year-old told Newsbeat.

"Sometimes it just feels like life is testing you."

Heavy is a duet with rising star Kiiara, who posted a powerful message about the loss of Chester on social media.

"I am devastated and confused. I cannot stop crying every time I'm reminded that you're no longer here," she wrote.

In September this year, Chester's wife posted a moving video on Twitter, showing Chester just 36 hours before his death. 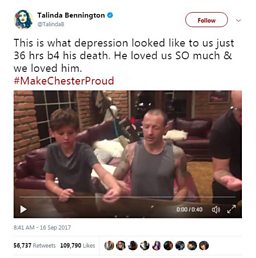 "I'm showing this so that you know that depression doesn't have a face or a mood," she said about her decision to share the video.

Events like World Mental Health Day and campaigns such as Radio 1's My Mind & Me are just part of a much wider push to get people talking about their mental health.

And as mental health becomes a more common talking point among friends and in public, then so this movement filters into pop music as well. Not only is it therapeutic for the person writing about their mental health to share their trauma with listeners, it's equally important for listeners to hear their story and know they are not alone.

"It shows us that someone well known who we may respect and have a high opinion of, is human like us," says Radio 1's Dr Radha.

"They experience the same feelings and challenges that we do and knowing this helps us think better about ourselves."

Watch as Slaves, Ella Eyre and Raye narrate the real-life stories of Radio 1 listeners and their struggles with mental health. 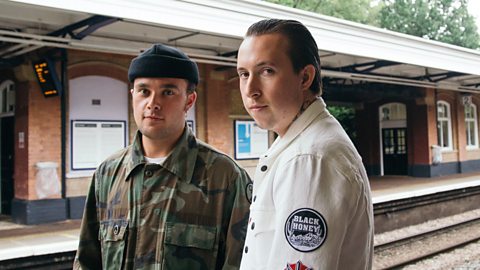 Word of Mind - Natasha and Slaves

The story of Natasha whose unhappy teens were linked to untreated mental health problems. 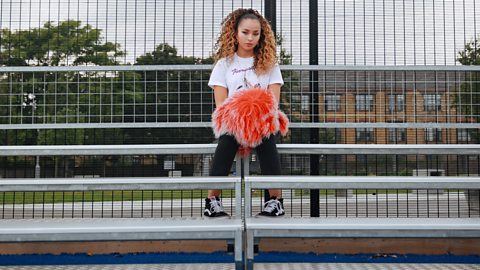 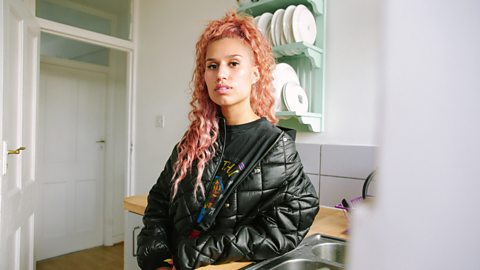 Word of Mind - Blessing and Raye

Blessing’s journey towards rebuilding her self esteem after suffering emotional abuse.