By Tabitha Rubens, 16, from London. 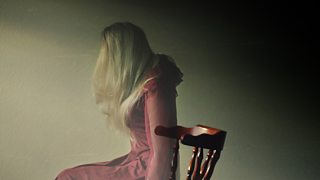 I was always sure my sister was woven from golden thread.

I was merely yarn.

She could stop the breeze with a fingertip and catch sunlight in her fists.

One warm summer night of a distant year, she dragged me from my bed and we climbed out of the bathroom window. With one hand on the drainpipe and the other gripping hers, I pulled myself after her and stretched out on the terracotta roof. We watched the fireflies circling the moon and decided what to be when we were grown.

June Solstice arrived and my sister filled my palms with honeysuckle flowers. She taught me to tease the string of nectar from the pale yellow petals and drop the sweet elixir onto my tongue. Dreams are made of such sweetness.

When the weather turned, and rain drummed across the ceiling, I’d play the piano so that I could hear her sing. My sister could sing as if the notes were alive; as though the crescendos were rushing through her blood and the symphonies reveling in scandalous secrets, unveiling their enigmas in a flurry of sound.

When my sister sung, the whole world stood still.

In mid-July joyful melodies filled the house: Italian love songs and the occasional musical ballad. But at the dawn of August, her preference diverged to tragedy, and her voice would waver in mourning, and break apart as she choked upon each accelerando. By September, her grief grew until she forced herself to settle on silence.

On Halloween I brushed her lips with indigo ink and plastered Titanium White over her prominent cheekbones. A skeletal silhouette stared back at me.

Beneath the façade, my sister flashed her Cheshire-cat-grin and led me out to face the monsters. We were flooded with sherbet lemons, pear drops and peppermint creams, but as the twilight sky blended into night, I watched her drop the confectionary into her pockets. To be forgotten.

Something had shifted in my sister. As the leaves fell to the ground, a part of her wilted, drooped and died. A thread snapped.

Then she started to count.

She would sink under steaming water in the bath, watching her knees break through the mountains of foam, and count the seconds she could hold her breath, cradling the oxygen between her toes, until her velveteen lungs seemed to shred into ribbons, twirling up the sides of the bath and writing scarlet pleas on the wall.

And as the tallies spiraled into towering monuments of rock and stone, she began to fade.

At first it was simply the palette of her skin; she paled until I could trace the blood vessels running across her jaw; could see the veins shining like fairy lights beneath her translucent cheeks.

By Bonfire Night she had a ghostly, fluorescent glow. You could look straight past her shadowed bones to her heart. It pulsated and throbbed, flashing crimson in time with the fireworks. I lit a Catherine Wheel and she poured her hot chocolate into the flower bed. Soaking the soil behind the pansies.

She became elusive; self-conscious of her spine, cerebrum and ileum. She blushed and shivered as invisible eyes moved across her kidneys, with their violet tinge, and scrutinized the gentle curve of her liver. She was most ashamed of her stomach. She watched it swell and shrink beneath her lungs, obsession glinting in her eyes. The only thing I ever noted was its emptiness. The unused acid and enzymes and obvious twinges of hollow pain.

She counted those too. She numbered the nauseous, clockwork groans, willing the digit to lengthen and stretch. Unknowingly, she was also numbering her days.

On Winter Solstice she finally turned invisible. As the frost danced up the window panes, she stepped out of sight. The nights drew in and my sister became no more than a memory. A passing shiver in the wind. Traces of her past fluttered round the house: old drawings, photos and certain smells. They tricked me into thinking she still lived. But how can someone live when no one can see them?

Christmas Eve bloomed. A fresh, still night. I lay awake, staring up at the ceiling until my eyes grew weary and unfocused, sending the edges of my vision into a drunken stumble. As the world blurred, I thought I heard a faint murmur slipping through the stillness.

I stealthily crept into the corridor, following the count. One. Down the stairs. Two. On to the landing. Three. Staring down at the blood-dappled teardrops streaking the pinewood floor.

I lay on my stomach, ducking beneath the darkness, pressing my eye to the sliver of light beneath her door frame. And I saw.

One. I saw the silence scream obscenities at her.

Two. I saw the stygian quiet tighten around her throat.

Three. I saw a demonic hush hurtle forwards, shifting into a parasitic mold, blossoming in her DNA.

Then the counting stopped.

And I saw courage.

Braveheart, Lancelot, Herculean courage. In a sliver of a girl. A girl who would not let this malevolent, spiteful sickness define her.

I hope she hears me.