Does stretching before exercise do any good?

Most people think that stretching before you exercise is good for you, hoping it will help avoid injury and even improve performance. But is there any scientific research to back up these claims? 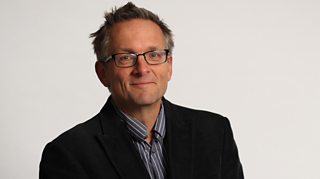 Michael went to the University of Bath to meet biomechanist Dr Polly McGuigan to find out.

Polly performed several experiments on Michael to see what stretching did to his flexibility, muscle stiffness and performance in a ‘maximal jump test’.

Michael stretched his leg muscles by holding his left and then his right leg in specific positions for 30 seconds. He used a typical pre-exercise stretching routine: starting by stretching the muscles around the hip joint (hamstrings) then the knee (quadriceps) and finally the ankle (gastrocnemius and soleus). By holding a joint at the end of its range of motion (i.e. very bent or very extended) the muscle around that joint is stretched.

Polly tested Michael’s knee extension ability by using a goniometer (a fancy protractor!) before and after the series of active stretches.

She attached the goniometer to his right knee with the centre of protractor positioned over the centre of rotation of the knee joint and the two arms taped to the thigh and the calf. With the hip joint bent to 90° Michael was asked to straighten his knee as much as he could can. The angle he could reach was measured. The larger the angle, the more flexible the hamstring muscles are.

After the stretching, Michael was able to extend his knee by an extra 9 degrees.

To determine how stretching effected the stiffness of Michael’s muscles he performed a series of 10 hops on his right leg before and after the stretching. The hopping test was used as it loads the ankle joint in a similar way to running.

He did this on a force plate that could measure the force in his limb during the hops, and the movement of his right leg was tracked by a motion analysis system detecting the position of reflective markers attached to his leg. There was also an ultrasound probe attached to his leg over his calf muscle to determine how much the muscle fibres changed length during the hopping exercise.

By taking all of these measurements we could calculate the force and the length of the muscle tendon unit that controls the ankle joint (the gastrocnemius muscle) during the hops.

This allowed us to calculate the stiffness (as explained in the graph below).

What we found is that after stretching, Michael had a 19% reduction in ‘muscle tendon unit’ stiffness. 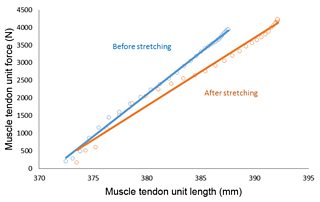 Firstly, Polly took a baseline measure of how high Michael could jump. For this, Michael performed 3 vertical jumps – aiming to jump as high as he could. He then did this all again after the stretching.

Did stretching improve those measures?

His maximal jump height went down by 24% after the stretching.

So why did stretching harm Michael’s jumping performance?

If your tendons and connective tissues become a bit more stretchy, a bit more compliant, the speed with which you can transmit force from the muscle (which is generating the force) to your skeleton (which is producing the movement) decreases a bit. So stretching beforehand makes you more flexible, but less powerful when you exercise.

Can stretching protect you from injury?

So stretching is useful to stay flexible (especially as you get older) and it is good for your metabolism — but not necessarily to help your performance or stave off injury.

If you’re doing any sort of competitive exercise which involves power such as jumping or perhaps sprinting then stretching beforehand isn’t going to help, and may in fact decrease your performance.

Instead, you should warm up your muscles a bit without stretching them. If for example you want to go for a run then beforehand you should spend a couple of minutes at a stroll, speed it up, maybe do a little bit of jogging. This will increase the blood flow to the muscles and that will warm them up and also improve their efficiency.

You can then do your stretching, to improve your flexibility, after you’ve exercised.