Nusrat Fateh Ali Khan is popularly known as 'The King of Kings' of Qawwali. His impact has led to him being honoured in 2017 with a BBC Music Day Blue Plaque in Birmingham.

As a singer he gave sensational performances with an other-worldy voice and could perform for long periods of time maintaining intensity, and emotion. He's widely credited with introducing Qawwali music to international audiences, and has been dubbed the 'Elvis of the East'.

Nitin Sawhney paid tribute to his vocal hero in 'Guru of Peace: An Introduction to Nusrat Fateh Ali Khan' for BBC Radio 6 Music.

To commemorate his legendary status, and to mark 20 years since his death, we present 11 facts you may have missed from his long and storied career.

1. An apparition of his father led him to a life in music

In 1964, when Nusrat was just 16 years old his father tragically died. Just 10 days after his passing, Nusrat had a dream in which his father appeared and instructed him to sing.

"I had a dream that my father took me to a place and asked me to sing with him" Nusrat revealed in the documentary film 'Nusrat Fateh Ali Khan, the Last Prophet'.

The 16 year old Nusrat gave his first performance at his father's funeral a few weeks later.

2. He inspired an album by another prolific performer 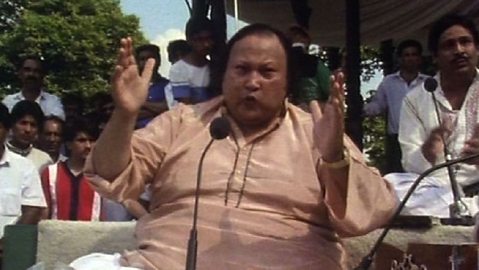 Nusrat’s stardom made him one of the brightest Pakistani musical stars of his era and he went on to enter the world’s biggest film industry; Bollywood. He composed music for three Bollywood films before his death, including the notable tracks 'Koi Jaane Koi Na Jaane' and 'Zindagi Jhoom Kar'.

For the movie 'Kachche Dhaage', he sang 'Iss Shaan-E-Karam Ka Kya Kehna'. The movie was released two years after his death in 1999. A moment of note in his film career was when singing sisters Asha Bhosle and Lata Mangeshkar gave their vocals to songs he composed for Hindi cinema.

4. First WOMAD, then the world

In 1985, he performed at the World of Music, Arts, and Dance festival (WOMAD) in London, a performance that not only elevated his status as a top level performer, but also helped to bring a wider cultural appreciation of Pakistani arts to a world audience.

The greatest examples of his art form crossing musical and geographical boundaries are firstly his collaboration with British musician, Peter Gabriel and secondly when American singer-songwriter Jeff Buckley was so moved by Nusrat's work he covered the Qawwali style in his own voice. The result in both cases was music that blended soulful Qawwali music with a more Western style.

The live recording was shot one year before the death of the late Nusrat Fateh Ali Khan.

6. He brought Qawwali music to the mass market with multiple Grammy nominations

The Oriental Star Agencies label is associated with some of the most prolific and memorable hits produced in the UK. The label is particularly responsible for exposing talent from abroad to UK audiences.

In the early 1980s Nusrat was signed by OSA in Birmingham and released several albums and music scores all around the world. The agency recorded some of the biggest stars of the time and introduced the likes of Bally Sagoo, Malkit Singh and Bhujhangy Group to the world.

8. Nusrat was honoured with the UNESCO music prize

In 1995 he was awarded a Unesco prize, for the title 'Greatest Musician', an example of how far his stardom had grown.

In the same year he went on to feature on a soundtrack album alongside Bruce Springsteen and Eddie Vedder of Pearl Jam, showing the world how truly popular he'd become.

Nusrat had a newphew: Rahat Fateh Ali khan. Rahat was selected by his uncle for training and educating in the grand tradition of Qawwali music. Once he'd begun formal training Rahat was part of his uncles performance by the age of nine.

Once he'd reached the age of fifteen Rahat was cemented as part of his uncles renowned Qawwali performance group, from there he began to venture into solo work and is now a prolific Qawwali artist in his own right.

10. His music dealt with politics

'Gurus of Peace' was a song gifted by Fateh Ali Khan to the album Vande Mataram, composed by A. R. Rahman, and released to celebrate the 50th anniversary of India's independence.

"Gurus of Peace" from the album Vande Mataram

A career filled with accolades and recognition continued after his passing in 1997 when music journalist Paul Williams selected a concert performance by Fateh Ali Khan to include in his 2000 book The 20th Century's Greatest Hits: A 'Top 40' List.

In the book Williams discusses his selection of the Top 40 artist achievements of the 20th century, a prestigious list showcasing the stardom that Nusrat had achieved in his lifetime.