Bird of paradise – a new perspective

Many of the sequences we filmed for Planet Earth II were only possible because of the experts that we work with in the field.

Evolutionary biologist Prof Ed Scholes, and wildlife photojournalist and cinematographer Tim Laman, have been studying and photographing birds of paradise for over 10 years. They are part of Cornell University Lab of Ornothology’s Birds of Paradise project.

It’s no secret that the birds of paradise are the most spectacular on Earth. But understanding why they are so colourful and dance so well is a mystery Ed and Tim have spent years trying to understand. They have been cataloguing the courtship displays of every species of this stunning family of birds.

But recently they noticed something new. When female birds of paradise watch males dance, they do so looking down from above, not the traditional viewing angle that we would would see from a hide.

Could it be the females are seeing some ‘secret’ display, one only visible from above the male? Along with the director Ruth Peacey, cameraman John Aitchison, Ed and Tim set off to West Papua in search of the Wilson’s bird of paradise to investigate, by filming one of these secret displays. 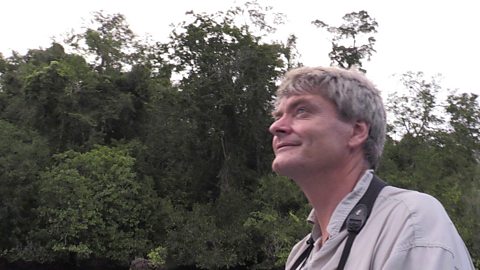 Web exclusive: Bird of paradise - a new perspective: Part one

The film crew join a team of scientists uncovering a bird mystery.

With the ‘top-down’ cameras in place, and two hides set up near the male's court, the film crew were now ready to capture the Wilson’s display from all angles.

They needed to get into their hides before sunrise to make sure they didn’t disturb the male and then wait until sunset. On the male's display court there was just enough light to film. But the forest here gets so little light that the hides remained in the shade all day.

Filming birds of paradise is all about patience and waiting in the dark! 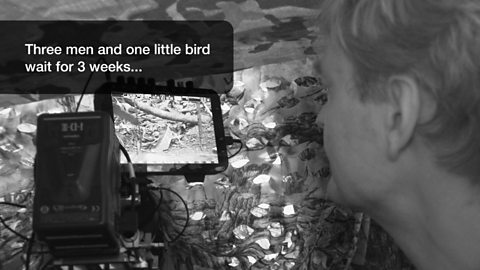 The team see the bird display for the first time.

This new perspective might be the key to understanding how female birds of paradise choose which males to mate with, and ultimately help to unlock one of the great secrets of animal behaviour - why this group of birds have the most elaborate displays on earth!