Crocodiles have some of the most sophisticated physiology in the animal kingdom.

Crocodile jaws are ten times more sensitive to touch than our own fingertips.In still water, a crocodile can detect the vibrations of a wildebeest drinking from 20 metres away

Crocodiles have the strongest bite of any animal on earth, able to exert over 2000 kilos of force and clamp their jaws shut in just 50 milliseconds. Six times faster than you can blink.

Throughout their lives crocodiles ingest small stones known as gastroliths, these stones remain in the first section of the crocodiles’ stomach and are thought to work in the same way as a bird’s gizzard, mechanically grinding up the contents.

The cold blooded crocodile has the most sophisticated heart in the animal kingdom. It has an extra aorta which means it can control where blood flows around its body. When submerged, oxygen rich blood is pumped to the brain and vital organs but as deoxygenated blood returns to the heart, a unique valve, the foramen of panizza, closes and prevents it from flowing to the lungs. Underwater, the lungs contain no new oxygen so pumping it there would be a waste of energy. The heart by-passes the lungs and re-circulates this oxygen-depleted blood to less important areas instead helping crocodiles stay submerged for up to an hour. The heart also helps to make the crocodile’s digestion the most efficient in the animal kingdom. After a meal the heart directs deoxygenated blood, rich in acidic carbon dioxide, to the stomach. The blood stimulates the production of the most acidic gastric juices known in nature. This remarkable system means crocodiles can secrete stomach acid 10 times faster than any other animal. 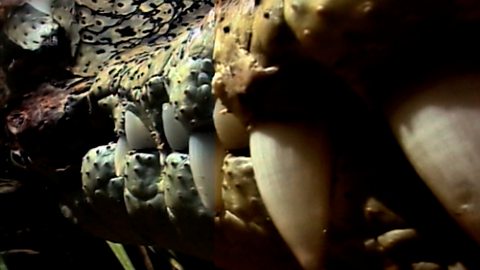 The secret of a crocodile ambush