The first art: What ancient objects reveal about humankind

Our ancestors were closer to nature than modern people, and they expressed it in their art. Ancient objects are a window into another time and place: can they tell us where our relationship with the natural world has gone wrong? James Fox finds some answers through the lens of the world’s most extraordinary artworks in his new BBC Four series, Nature and Us: A History through Art.

Today, people think of nature as something that is: everything that we have not made. Nature is mountains, rivers, the animals and plants living in these landscapes... and humans are somehow separate from that.

Thousands of years ago, we weren't only part of nature; we were at its mercy as our ancestors struggled for survival in the last Ice Age. Today, some people still battle those elemental forces.

“Animals, not people, were the first subjects of art”

Humans sought refuge in caves during the Ice Age, and that is where we find the first figurative art works. The breathtaking images below feature in the first episode, as James Fox explores the earliest evidence of formidable creative abilities. Drawn in charcoal and red ochre over 30,000 years ago, and found in the caves of France and Spain, they offer tantalising clues about our ancestors' attitudes to nature.

Staggeringly accurate art is proof our ancestors were intimately connected to the other species living alongside them.
James Fox

When people first started making art, you might think that the first thing they would represent would be themselves, their families and their loved ones, perhaps their ancestors or their rulers. Yet prehistoric people hardly ever painted full human figures. What they painted was animals.

These renderings of bison, wild horses and mighty bears are not only beautiful and evocative; they are “staggeringly accurate”, says James, “depicting the anatomy, and even the behaviour, of these creatures with a precision that is proof that our ancestors were intimately connected to the other species living alongside them”.

“We are no better at art than our ancestors”

Prehistoric humans depended for their lives on reindeer, so much so that they represented them in art. In most lights, the object pictured below looks like a nondescript pebble. It is actually an extremely precious, ancient artwork made around 12,000 years ago in the south of France.

An ancient artist has made an image of extraordinary naturalism - an animal that is full of life.
James Fox

Carved very delicately across the surface is a reindeer with beautiful antlers, walking from right to left. It is such a contemporary image that it could have been sketched moments ago. Technically, the lines are so confident and achieved with just a few strokes of a piece of flint. James says, “it reminds us that we are no better at art than our ancestors were. This ancient artist has made an image of extraordinary naturalism - an animal that is full of life”.

James speculates that these objects could have been hunters' talismans, worn around the neck or body to to bring good luck during the hunt.

“Make time to talk to the reindeer”

Nils Peder, who we meet in the first episode of Nature and Us, is a contemporary Sami Reindeer Herder in northern Norway. The Sami are the indigenous people of the European Arctic, with a culture stretching back unbroken into prehistory. Their way of life is still influenced by a belief in nature’s spiritual energy and power.

These early artworks might suggest that our first relationship to nature was one of violence. A cycle of hunting and killing, and being killed. But James sees something else: “A tenderness or fascination, perhaps even a respect”.

Early artworks display a tenderness or fascination, perhaps even a respect.
James Fox

Although we can't ever know exactly what beliefs our early ancestors held, it seems likely that they thought that everything in nature, including themselves, was infused with spiritual energy and power. This belief system is often called animism.

Humans and animals being interconnected is central to the animist world view. This sculpture, carved from mammoth ivory about 40,000 years ago, and found in a cave in southern Germany, shows a human body with a lion's head - a magical vision of two species and spirits fused together. Here, we are part of nature and it is part of us.

For centuries before the first pyramids, Egyptian artists painted farmers toiling in the fields, harvesting crops, processing grain and transforming it into food. They made exquisite sculptures of the newly tamed animals that work the land.

One of the most important transformations in human history.
James Fox

The object below may look like a children's toy, but it was made almost 4,000 years ago in Ancient Egypt. It shows what James calls “one of the most important transformations in human history”.

A young farmer wears a linen kilt - amazingly, the fabric has survived. He is ploughing land behind two charming speckled cows. It was originally placed in the tomb of a wealthy landowner, with the intention of providing plenty of food and drink in the after-life.

The magical, spirit-filled wild animals of prehistoric animistic culture have gone. This sculpture captures a very different relationship between humans and nature: a collaborative one in which we are using them, but also looking after them - and one in which we have control.

Agriculture marked the beginning of a long journey in which we separated ourselves from nature and tried to control it, beginning a power struggle that is still playing out today.

In the rest of the episode, James explores the development of cities, including the ancient Assyrian city of Nineveh and the Mayan civilisation, and how they accelerated our changing relationship with nature. He also examines the role of religion, through the ancient art produced by Hinduism in India, as humans looked for more elaborate belief systems describing their place in the world.

Lion Hunt of Ashurbanipal: A fantastical depiction of a ritualised lion "hunt" from the North Palace of Nineveh, featured in episode one.

A depiction of Hun Hunahpu, the Maya maize god.

Vishnu: Transforming the powerful forces of nature into deities. Like animism, Hinduism made no distinction between humans and all living beings in nature. 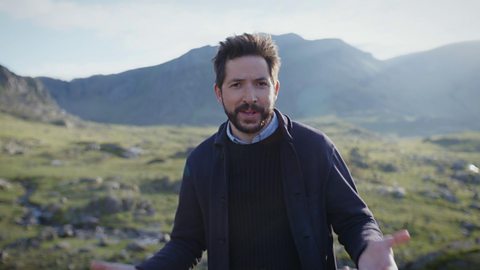 How has our relationship with nature changed?

James Fox on nature, through the lens of some of the world’s most extraordinary artworks.