Sleep No More: The Fact File

The read through for Sleep No More took place on Thursday, 23 July, 2015 and filming ran from 27 July to 12th August. 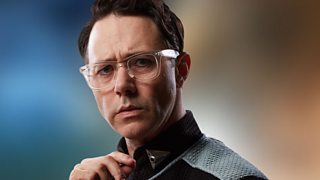 Reece Shearsmith as Rassmussen in Sleep No More

Sleep No More is unique insofar as it has no standard opening titles and prior to the end credits, no onscreen text to identify the adventure’s name. Early on, however, the screen is filled with text and letters spelling out the words DOCTOR and WHO are momentarily visible. The show’s title sits amongst a jumble of other information but is slightly brighter than other text meaning it’s more easily discernible. Unusually, the credits for the writer, producer and director all appear after the episode’s action, directly preceding details of the cast.

It’s never explicitly stated but it’s possible Le Verrier lab is named after Urbain Le Verrier (1811 –1877), the French mathematician who deduced the existence and position of Neptune using mathematics alone. At the start of the adventure, of course, it’s revealed that the lab is in orbit around that planet…

The episode is Reece Shearsmith’s first appearance in Doctor Who although he did play the actor who brought the Second Doctor to life - Patrick Troughton - in An Adventure in Space and Time, the drama about the show’s origins that was also written by Mark Gatiss.

In Greek mythology, Morpheus was the god of dreams who could appear in mortals’ dreams in any form. He is often depicted as a winged deity and the expression, ‘in the arms of Morpheus’ simply means to be sound asleep.

Nagata mentions ‘Space Pirates’ which to a Doctor Who fan instantly suggests the 1969 adventure, The Space Pirates! In that story, the pirates were commanded by Maurice Caven and his comrade in crime, Dervish and together they plundered aragonite - one of the most precious minerals in the galaxy.

Consider yourself… part of the furniture! When the Doctor finishes Nagata’s sentence he’s quoting the song, Consider Yourself, from Oliver!, the musical based on the novel Oliver Twist, written by the Time Lord’s old pal, Charles Dickens. 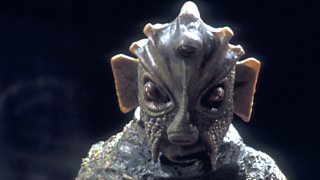 A Silurian from Doctor Who and the Silurians

‘Mr. Sandman’ is a popular song that exemplifies the sound of the 1950s. Written by Pat Ballard and first recorded in May, 1954 by ‘Vaughn Monroe & His Orchestra’, The Chordettes released the best known version of the hit 5 months later. Their single reached no. 1 on the Billboard United States charts and no. 11 in the UK charts and incidentally, The Chordettes were an all-female quartet, not entirely dissimilar to the holographic group we see singing the number in Sleep No More!

The voice of the computer is played by Nikki Wilson who also produced the episode. You can see Nikki discussing the best part of her job in this Ask the Experts video!

Tom Wilton played a Zygon in The Zygon Invasion/The Zygon Inversion and makes a speedy return to the show, here appearing as one of the Sandmen!

When the Doctor shows his chagrin at Clara naming a newly encountered species, he tetchily references the Silurians… The most likely explanation for his allusion is that after the Earth-based, reptilian species was discovered by mankind in Doctor Who and the Silurians, the Doctor didn’t call them the Silurians, suggesting it was a human who gave them their accepted name. In actual fact, the species were not from the Silurian era meaning their name was misleading at best and at worst, wildly inaccurate!

The dialogue below is from Act II, Scene ii of Shakespeare’s Macbeth and lines from it are quoted by the Doctor at two points of the adventure. And, of course, the episode’s eerie title also originates in this exchange: 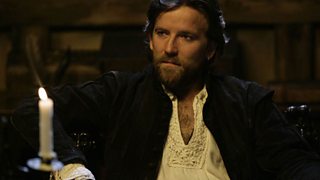 LADY MACBETH
What do you mean?