This week marked an historic moment for Rugby Union Weekly: our first ever live show!

But for one week only they left the comforts of their, um, 'London Studio', hitting the road and hosting the pod in the world famous BBC Radio Theatre, in Old Broadcasting House.

(And don't worry: they brought Patrick along with them!)

Ugo and Chris introduced themselves to the audience, trying to explain their dynamic as a duo...

The former Lions wing said: "The only way I can describe us, I think we kind of sound like and argue like two adolescent teenagers, and that's how it feels."

"I completely disagree with that!" Jones joked.

Ugo had a great analogy to describe their relationship... 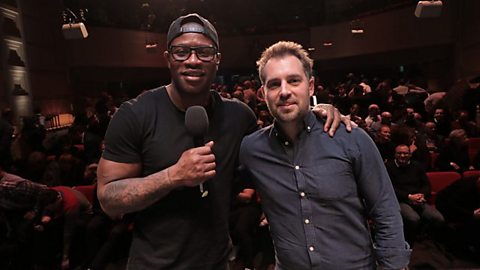 Time to introduce the very first guest on our very first live podcast - it's Billy Vunipola!

On a freezing February evening the England and Saracens number eight rocked up in a t-shirt and shorts.

Vunipola revealed: "I did the podcast before and we were just in that little room... So I didn't get ready, I thought we would be in that room and no one would see what I'm wearing."

"I was a bit surprised to find out there was a crowd here, so my bad!" he exclaimed.

When Billy met The Queen

It’s been a big couple of weeks for Billy. On top of the live pod, he’s been to Buckingham Palace to meet The Queen.

She wasn’t sold on the idea that rugby is faster and more powerful than it used to be. 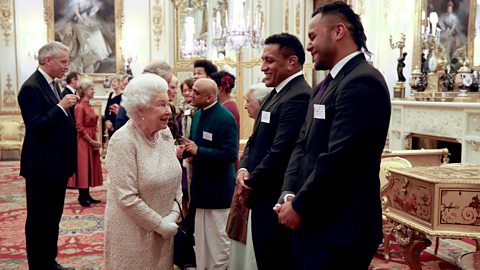 At least he can laugh about it.

The moment you grab a picture with Billy during the pod

Becky, a big Billy Vunipola fan, was in the audience and wanted to ask the number eight a question... What happened next was podcast gold!

Ugo invited her up on stage for a photo with Billy, took a few on her phone, Becky checked them only to reveal she wasn't the biggest fan of Ugo's photography skills. 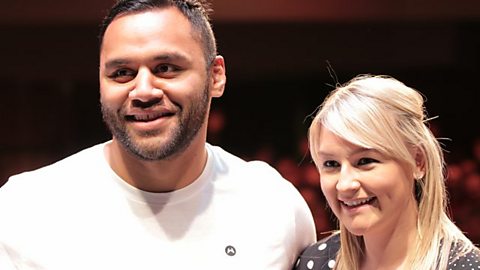 The Grand Slam champions and World Cup runners up, are unbeaten in the 2018 Women's Six Nations so far, having comprehensively beaten Italy, Wales and Scotland.

Scott said: "Although the scorelines, they haven't been the closest games, every game has their own challenges. Yeah that's cliché, but they do."

Waterman added: "I think as a team we've come really far, our next game is going to be a huge test for us.

"France in France is probably one of the hardest Test matches you'll have to face so it's going to be interesting to see how we do."

'They're just a different level of player'

The two Red Roses took questions from the audience, discussing how they became involved with rugby and seeing a new generation of player coming through.

Scott answered: "The girls coming through, the 18-year-olds we've got in the team, I think they're just a different level of player, mentally more than anything they just understand the game.

"I think that comes from them playing at such a young age and I think it shows when they get out onto the pitch now."

Waterman added: "There are so many more girls involved in minis and junior sections, there's a lot of investment from the RFU in terms of the women and girls strategy."

Our guests had time for a quick selfie session after the show, making sure to sign them as well!

We've even put a link to the account here, making things even easier for you...

Well, you've read about how the night went the only thing left is to listen to the podcast!

You can download and listen to the podcast here: LIVE on stage with Billy Vunipola