Monuments man: The Barnsley stonemason training Syrians in the art of restoration

When its civil war finally ends, Syria will have a huge job restoring its ancient monuments. Once it had six UNESCO World Heritage sites, now all have been either destroyed or badly damaged. But restoration work requires special skills. KIRSTY LANG travels to Jordan to meet a master stonemason who is training Syrian refugees in traditional stone carving.

The first thing I hear when I get out of the car in Mafraq is the rhythmic sound of dozens of chisels hitting stone. Under a makeshift roof providing shade from the scorching sun is a large group of trainee stonemasons – men and women – each with their own block of white limestone.

They’re carving ornamental cornices and triangular pediments, the sort you see on the top of classical buildings. “It’s bloody hard that stuff,” says Tony Steel, a 68-year-old stonemason from Barnsley who is running the training scheme. “We source it locally. That same strata runs all the way from here up to Damascus,” he says, pointing northwards to the Syrian border which is a couple of miles away.

Mafraq is a modern, dusty, little town in the desert with not much to recommend it. It is now home to 180,000 Syrian refugees. A third of them live in a tented camp just outside, pitched on the baked earth with not a tree in sight and surrounded by high-wire fences and security lights. It looks more like a prison than a refuge. For every Jordanian living in Mafraq there are two Syrians.

A Caravansary archway before and after restoration. This is the kind of project that Steel is training his pupils to carry out.

Tony Steel teaching one of his trainees

Steel says the thing he misses most is having a pub to go to. The son of a Yorkshire miner, he became an apprentice stonemason at the age of 15. He says: “I was fascinated by the stonework in old churches and there’s a lot of them in Yorkshire.”

He went on to work on Westminster Abbey, St Paul's and Wells Cathedral before being invited by UNESCO to work on heritage sites all over the world, including Syria. He was busy restoring the ancient citadel in Aleppo when the war broke out.

He reminds me of the World War Two 'Monuments Men' who went around Europe saving art treasures from Nazi plunder. But he is also sanguine about what can be achieved. Even before the conflict broke out in Syria the traditional craft of stonemasonry had pretty much died out, and you can’t restore ancient sites with machine tools.

Steel’s trainees are fairly mixed bunch, ranging in age from 15 to 50. Quite a lot of men in their 30s and 40s who used to work in the construction industry, a few teenage boys whose parents made them sign up, housewives who’ve never worked before and a couple of ex-soldiers, one of whom deserted the Syrian Army and can’t go back as long as Assad remains in power.

As befits a Yorkshireman, Steel is blunt about their abilities. He says: “About 30 per cent of them are good, some a very good, but the rest are going to need a lot more practice. I’ve got 45 trainees and 10 months to train them. But I need more time and another competent stonemason to help me. I’m not running some arts and crafts workshop”.

Apart from practical stone carving skills, they’re also taught drawing and geometry. In an adjacent building, Noor, a young Jordanian architect, is supervising group of women bent over large sheets of paper using rulers and protractors to make templates for the stone.

Steel looks at them proudly: “Funny really, people think it’s a token thing including women, but it turns out they’re much better at geometry than the men.”

He introduces me Owais, a slight young woman in a dusty pink belted abaya and matching headscarf. She’s from Aleppo, where much of the old city, including the famous Umayyad Mosque complex with its 11th-century minaret, has been reduced to rubble. “Tony and I talk a lot about Aleppo, he knows my city well,” she says proudly.

Her dream is to go back and restoring the old souk. She gets out her phone to show me photographs taken before the war of the vaulted ceilings with intricate stone carvings and small openings in the centre to allow the natural light in. 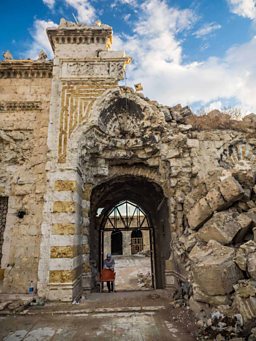 The entrance to the Umayyad Mosque in Aleppo, which is the kind of project Steel hopes his trainees will be able to undertake

People think it’s a token thing including women but it turns out they’re much better at geometry than the men. 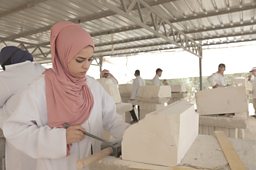 One of the students at work on the project

The Syrian Stonemasonry Training Scheme is funded from London under the aegis of the British Council. It’s part of something called the Cultural Protection Fund which was set up by the Government in the wake of ISIS’s destruction of the ancient city of Palmyra. But the training scheme is only a pilot and if it isn’t renewed the money will run out in October.

Steel says his big fear is that the Syrian authorities will just bulldoze the damaged buildings and put new ones in. It’s what happened in Lebanon after the civil war.

He then shows us a video on his laptop. It’s 3D imaging taken by a drone of a beautiful ruined mansion in Aleppo built around a traditional Arabic courtyard.

He says: “I look at that and think 'I can save this building', but a structural engineer will look and say 'pull it down'.” When Owais watched it she, cried.

All images are courtesy and copyright of The British Council. 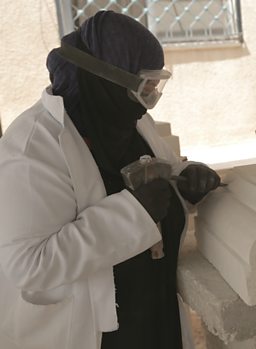 The Syrian Stonemasonry Training Scheme in Mafraq, which is run by Tony Steel