Is it ok to give someone a second hand gift?

It's cheaper and better for the environment, but would you be comfortable giving — or receiving — a pre-loved present?

As we attempt to be responsible consumers, many of us are happy to recycle packaging, choose food with low air miles, or even scour charity shops for clothing bargains. But there is one area where it seems we struggle to be 'green': gift giving.

“There’s a lot of pressure when you’re buying a present for some else to make it a new thing … somehow the price tag matters,” says Harriet Brace of Zero Waste Scotland on Clever about Cash.

But at a time when we’re all being encouraged to shop sustainably do we need to rethink our attitude towards buying for others? 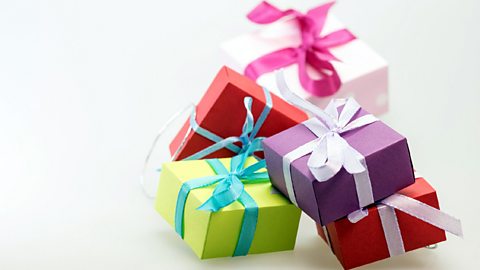 Should we give second hand gifts?

Harriet Brace discusses the pressure to spend lots on presents.

There are financial and environmental benefits to buying second hand items, but despite those obvious attractions, it just doesn't appeal to everyone.

Harriett believes that some people can be distrustful of pre-loved items: “There's still a stigma about second hand shopping, particularly when it comes to things that are aimed at children,” she says.

Harriet's colleague Miriam Adcock adds: "Buying second hand is fantastic, and we’re finding that 68% of Scots are saying that they’ve bought second hand things for themselves, so it is a growing trend."

Harriet shares her own advice for anyone thinking about taking their first steps into second hand gift giving:

"I think the thought that you put into something is a lot more important [than spending lots of money]," she says.

And if you're tempted to give it a go, but are wary of how a pre-loved present might be received, it may be wise to follow Harriet's example.

"I’ve given people second hand gifts and just not told them and they have not known the difference," she says.