Plankton: The source of life

One crucial element that was vital to understanding the Okavango story was the emergence of fresh water plankton. When the water touches their eggs in the sand, within a couple of days, the creatures inside wake up from suspended animation and the eggs burst, releasing these vital creatures, that are central to the Okavango’s food-chain. Although this is something that occurs in wetlands all over the world, the microscopic moment of hatching is impossible to see in the wild and has only ever been witnessed in the lab, and barely filmed. So it was certainly impossible to conceive of doing it on location in the Kalahari.

However, this emergence is a process that happens to be the subject of a study by Dr Luisa Orsini and her group at the University of Birmingham. They were also keen to film it, with the help of the latest high resolution video-capable microscopes. As a result, we were able to show, probably for the first time on TV, an essential process for life, one without which, the Delta simply could not be the haven that it is. 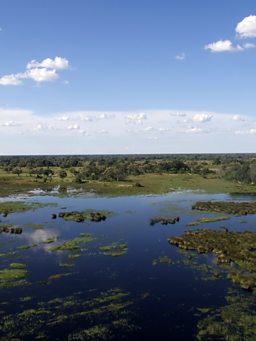