Distant beauty: How Van Gogh bent Japanese art to his own will

Although Vincent van Gogh never went to Japan, he fell under the influence of its art while living in Paris. Ahead of a blockbuster new exhibition at the Van Gogh Museum, WILLIAM COOK discovers how the dynamic strokes of Japanese art seeped into the great painter's late work.

In the Van Gogh Museum in Amsterdam, home of the world’s biggest Van Gogh collection, curator Nienke Bakker is putting the finishing touches to the museum’s latest blockbuster. A dazzling array of landscapes and portraits, the overall effect is mesmerising. Van Gogh is more intense than any other artist. He stops you in your tracks. He sucks you in.

He was obsessed by Japanese art, and its influence on his late work was profound

At first glance, it looks like a random selection – but these pictures have one thing in common: they were all inspired by Japanese art. This show has already been a big hit in Japan, in Tokyo, Sapporo and Kyoto, and now it’s coming home. Highlights include Self-Portrait with Bandaged Ear, from the Courtauld Gallery in London, now returning to Van Gogh’s native Holland for the first time since 1930.

Vincent van Gogh never went to Japan, but he was obsessed by Japanese art, and its influence on his late work was profound. The sharp dark outlines, the bright blocks of colour – these defining elements echo his love of Japanese printmaking. It gave his art that cartoonlike quality, which sets him apart from other European artists. It’s part of what makes him unique.

Van Gogh discovered Japanese art in 1886, when he was living in Paris. After centuries of isolation, Japan was now open to European traders. In Paris, and throughout Europe, Japan was all the rage. People furnished their homes with Japanese ornaments, and wore kimonos to fancy dress parties. Paris was flooded with Japanese prints. Vincent bought hundreds of them. He planned to resell them, at a profit, but he never got around to it. He liked them too much to part with them (he was a useless businessman).

Vincent couldn’t afford the finest prints – he had no Hokusai in his collection. He collected cheaper prints by decent artists – perfect for a student of Japanese art. "He loved strong colours, and the colours in these prints are very powerful," says Bakker. Those powerful colours quickly seeped into his own art.

What he appreciated about the Japanese was their attention to detail. He saw perfection in everything they did.
Axel Rüger, director of the Van Gogh Museum

Van Gogh had taught himself to paint by copying European masters like Millet. Now he set about copying these Japanese printmakers. This gave his art a different focus. It was like painting with his left hand. "The Japanese way of looking at the world, and picturing the world, is very different from our Western European traditions," says the Van Gogh Museum’s director, Axel Rüger. "What he appreciated about the Japanese was their attention to detail. He saw perfection in everything they did."

Van Gogh & Japan features some of these copies, plus many of the prints he collected (Vincent bought more than 600 prints and the Van Gogh Museum owns over 500 of them). Comparing those Japanese originals and his copies is intriguing. You see him moving out of his comfort zone, learning to paint in a new way.

"It helped him to intensify his colours, to simplify the compositions," says Bakker. "He wanted to bring more light and more colour into his paintings. He wanted to improve his drawing style." Vincent saw how Japanese artists drew spontaneously yet accurately, capturing the essence of an object in just a few concise lines.

"It gave him a new direction – it helped him to work towards a more controlled and powerful brushstroke," says Bakker. "It was fundamental to what his art would become." 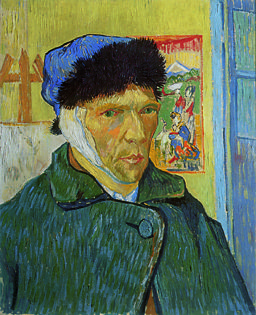 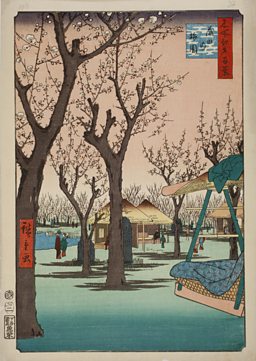 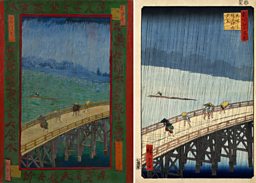 Van Gogh’s infatuation with Japanese art wasn’t confined to making copies. "He didn’t simply imitate," says Bakker. "He used it to reinforce his own style." His subsequent landscapes are painted with a fresh perspective.

He didn’t simply imitate. He used it to reinforce his own style
Nienke Bakker, curator at the Van Gogh Museum

He deploys the Japanese device of putting a large object in the foreground, and a distant view beyond it. The focus of his pictures is scattered, rather than concentrated on a single object. It was quite unlike the viewpoint of his European contemporaries.

From Paris, Van Gogh went to Arles, in the south of France, in search of light and colour. "I’m in Japan here!" he exclaimed. Like a lot of things Vincent said, this was nonsense. With some stylised woodcuts as his only guide, he had no way of knowing if Arles was anything like Japan. In fact, it was nothing like it.

However he wanted it to be like Japan, and that was what really mattered. As this selection demonstrates, he painted Arles in an Oriental way. 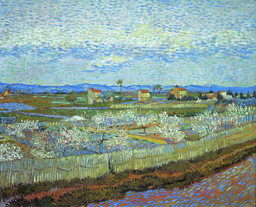 An hour’s drive from Amsterdam, in the handsome Dutch city of Den Haag, the Van Gogh Museum’s sister museum, the Mesdag Collection, is staging a parallel exhibition, Mesdag & Japan. This smaller show, of Japanese art and artefacts, is an illuminating backdrop to Van Gogh & Japan.

Hendrik Mesdag was a conventional landscape painter, a generation older than Van Gogh, who enjoyed the commercial and critical success that eluded Van Gogh in his lifetime.

He lived in a grand villa in Den Haag, which now houses the Mesdag Collection – an opulent array of paintings by Mesdag and other artists, such as Pieter de Josselin de Jong. Mesdag also collected Japanese furniture and porcelain. It’s this collection which forms the backbone of Mesdag & Japan.

Van Gogh lived in Den Haag for a while, as an unsuccessful artist. He respected Mesdag’s painting, but he couldn’t help but envy Mesdag’s wealth and fame. The Mesdag Collection includes pictures Van Gogh admired, and the sort of Japanese art he could never afford to buy.

Yet wandering around Mesdag’s palatial home, you can’t help wondering – if Van Gogh had shared Mesdag’s success, would he have become a great artist? Would he have studied Japanese art, and absorbed it - or would he have done what Mesdag did, and simply collected it for fun?

Sadly, Van Gogh only had a few years in which to develop this Japanese aspect of his art. He committed suicide in 1890, aged just 37, a mere four years after he bought those prints in Paris.

However without Japanese art, maybe he would have died even sooner? "Studying Japanese prints made him happy," says Bakker. "These prints reflect a beautiful world, with beautiful colours – it’s a great place to visit, even if it’s only in your mind."

Van Gogh & Japan is at the Van Gogh Museum, Amsterdam, from 23 March to 24 June; Mesdag & Japan: Collecting the Far East is at the Mesdag Collection, Den Haag, until 17 June. 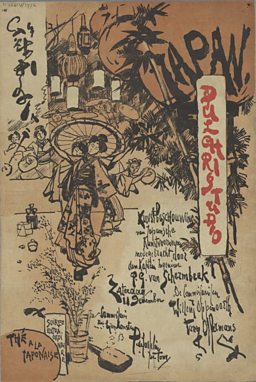 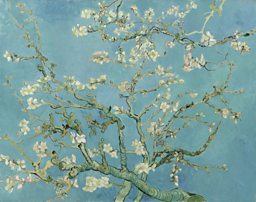 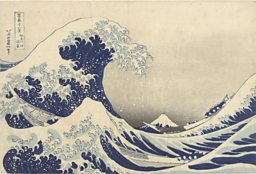