How can I tell if I have a thyroid problem, and what can I do about it?

On Trust Me, I’m A Doctor, one of the health topics we get the most questions about is the thyroid. 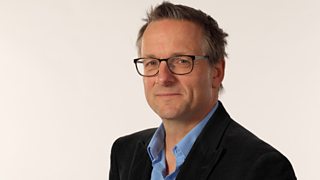 The thyroid is a butterfly-shaped gland that sits in the neck and produces hormones. Hormones can be described as ‘messengers’ in the body – they are chemical substances produced by glands, that help to control and regulate various processes, such as hunger, emotions or reproduction.

The thyroid hormones are extremely important because they regulate our metabolism, that is, they tell each and every cell, and therefore each tissue and organ, when and how much fuel (or food we eat) to convert into energy and heat.

T3 moves into the body’s tissues where it regulates our cellular metabolism – the speed at which the body performs all of the myriad chemical reactions that keep us alive.

T4 is the inactive version of the T3 hormone. It is released into the blood and then activated into T3 as required.

If the thyroid isn’t functioning properly, the effects can be widespread and varied. If it produces too many hormones, it results in a condition called ‘hyperthyroidism’. But by far the more common problem is a condition knowns as ‘hypothyroidism’ - a low functioning thyroid. This occurs when the gland isn’t producing enough hormones, or when the T4 hormones aren’t being fully converted into the active T3 hormones, so can’t be effective.

There are various different estimates for the numbers of people who suffer from hypothyroidism. It’s generally thought to affect about 1 in 1000 men, and somewhere between 1 in 70, or 1 in 50 women. However, experts believe that many cases go undiagnosed and unreported. Why it affects more women than men is not known. It’s commonly caused by an autoimmune condition called Hashimoto’s Disease which attacks the thyroid gland and affects hormone production. In turn this prevents the body carrying out its chemical processes at a normal level.

Other things that can potentially affect the thyroid gland are stress, nutritional deficiencies, glandular fever (it is possible in some cases that the virus causes damage to the thyroid gland), major trauma such as car accidents (e.g whiplash), trauma around the gland itself, for example any major surgery, and pregnancy, which can leave the mother hypothyroid after the baby is born.

Because the action of the thyroid gland controls our metabolism and is so integral to our bodies, the symptoms of hypothyroidism are far-reaching and debilitating, and can vary from person to person.

One of the reasons that we get so many questions about the thyroid on Trust Me, is because there is a great deal of controversy in the medical world about the diagnosis and treatment of hypothyroidism.

This seems to result in many people not being happy with their treatment, or feeling that they’re not getting the treatment they need.

One of the issues around diagnosis is the interpretation of the tests performed.

If your GP suspects you might have issues with your thyroid gland, or with the hormones it produces, you’ll usually undergo a blood test. Depending on where you are in the country and your local NHS Trust, your blood test will likely look at two key factors:

What clinicians are looking for are levels of these hormones that are ‘outside the standard reference ranges’.

If you look at your test results, you will usually see a number and next to it a reference range which is calculated by taking averages throughout the population, adjusted for the lab that does the testing.

In addition to these initial blood tests, GPs may also test for thyroid antibodies which indicate Hashimoto’s Disease.

Most patients whose blood test results show high levels of TSH and low levels of T4 receive treatment to supplement their levels of T4 (Levothyroxine).

In the majority of cases this stabilises hormone levels, helps symptoms and leaves patients feeling better.

However, in some cases, diagnosis and treatment of hypothyroidism is not this straightforward.

One of the issues with the blood tests for TSH and T4 are the reference ranges used to determine whether your levels are abnormally high or low. Normal ranges vary from country to country, and there have been suggestions from some bodies that the UK ranges should be lowered or raised.

It’s also possible that if the results come back within the reference ranges, but at the upper and lower limit of these ranges, a diagnosis can be missed. So if your numbers are at the extremes of what is considered ‘normal’, and you’re experiencing symptoms, it’s possible that further investigation is needed.

Sometimes when patients are diagnosed with hypothyroidism and prescribed T4, this doesn’t make them feel any better. It may be that these patients have trouble converting T4 into the active version of the hormone, T3. This process is dependent on enzymes in the body that need certain nutrients to function. It could be that these enzymes are not working properly, or the body isn’t producing enough of them or it could be that patients are lacking the nutrients needed for these processes, such as selenium.

An alternative treatment option is to take T3 – the active hormone. It is possible to be prescribed T3 in the UK, but it is an expensive treatment and requires regular tests to ensure the correct dosage. Normally, our bodies carefully regulate how much T3 we need throughout the day, and overstimulation with T3 can have health consequences if it goes unchecked. Long term effects of taking too much T3 hormone can include osteoporosis and heart arrhythmia.

Currently, The British Thyroid Association believes there is insufficient clinical evidence for administering T3 either on its own or in combination with T4. However it may be that as more research is carried out, this will change.

Another alternative treatment is something called Natural Desiccated Thyroid (NDT) – something that’s been around for over 100 years. NDT is made from the gland of a pig or a cow and contains all 4 thyroid hormones. The ratio of the hormones in these supplements isn’t quite the same as in humans which is one of the reasons clinicians might be reluctant to prescribe them (they tend to have more T3 than is naturally produced by human thyroid gland).

There are no NDT medicines licensed for use in the UK. This means that the body responsible for regulating and testing medicines, the MHRA, has not approved any of these products for use in the UK. However, many products have gone through similar testing and regulation in other countries (the USA for example), and our own GPs are able to prescribe these medicines in the UK ‘off licence’. This means that the individual GP has more responsibility for the use or misuse of these products, which may help explain why they are rarely prescribed.

If you feel you might be suffering from hypothyroidism, you can find out more at Thyroid UK, which provides information, research and links to support groups and forums.