In 2017 music journalist John Doran was running out of time to give a new music column – for online culture magazine The Quietus – a title.

John went with "New Weird Britain", but little did he know the musical movement he presumed he had just invented was actually already a thing.

Here, John reveals the radical music he found being made in the margins of Britain…

I was seeing musicians who were completely disentangled from the mainstream music industry, liberated – not crushed – by its collapse. They were making unclassifiable music, putting on unrepeatable cross-disciplinary shows in non-standard venues, mixing music with film, contemporary dance, outlandish costume and performance art. 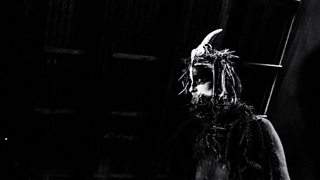 The emphasis was on the live event because it didn’t allow for commodification and encouraged direct participation by the audience. Excitingly it tended to be female led and existed outside of not only the traditional rock circuit but outside of the normal arts circuit as well – not to mention way outside the usual hip metropolitan city centres.

It was exciting. Like watching a magic eye picture suddenly come into focus after hours of staring at it. The kind of acts that were once othered – often by being termed ‘outsider’ – were now becoming so prevalent that they could no longer be treated as anomalies.

Suddenly, I was watching some of the most exciting live events I’d ever witnessed or been part of. UKAEA, a techno act, as much influenced by pre-Christian animist ceremonies as they were by Gabba, hardcore and Indonesian gamelan, carrying out occult rituals; Lone Taxidermist’s demented Trifle show, featuring home made latex costumes of weird custard aliens and eight foot tall, anatomically correct vaginas spraying whipped cream over the audience; Hawthonn, a pair of Marxist magicians in Leeds creating psychedelic sonic realms about the uncanny Yorkshire countryside.

New Weird Britain is just a small symptom of a much wider shift in consciousness that is starting to happen.

When describing nightmarish dystopias of the future, George Orwell’s 1984 (published in 1949) contained the idea of the “versificator” and Yevgeney Zamyatin’s We (published in 1920) described the idea of “musicometers” – both computer programmes which churn out insipid formulaic music to all citizens. But this is a hellscape that has already partially arrived. AI software which can produce pop songs, symphonies and ambient music already exists, and the rigid algorithms that control gigantic music streaming services mean that only songs written to a specific formula prosper. This is helping to create a densely populated ultra-conservative mainstream where everything – no matter how new – sounds hauntingly familiar… an echo of something we’ve already heard.

And what better way to reject the ‘machinification’ of modern culture by producing art that is resistant to traditional release or streaming and even near impossible to describe? Many writers have been caught posing the slightly daft question: where has all the protest music gone? The question ignores the fact that times have moved on from 1968 and the protest song is much more likely to appear in the form of a grime track than some folk ballad delivered by an earnest beardie with an acoustic guitar. But the question itself is fundamentally flawed.

The idea that violently changing times cause protest music is not always true – which is not to say that they have no effect on culture at all. Musicians are not always so obvious. The distress caused by a rapidly changing society is often mirrored in music’s form rather than its content or message.

And these new times we live in are very weird and they are only getting weirder. The way we perceive reality itself – via conflicting news sources and digital platforms specifically tailored to reflect our own beliefs – has uncovered a huge gulf between how we see things and how others see them.

And when the fabric of reality itself begins to break down, why should we expect culture to maintain its integrity or conformity?

The artists of New Weird Britain are opting out of a mainstream which cannot understand them and a streaming culture that cannot provide for them, choosing instead to embrace the immediate, uncommodifiable live moment and an artistic practice that addresses their entire lives. They are creating absolutely stunning art and in the process they are even imagining a better future.